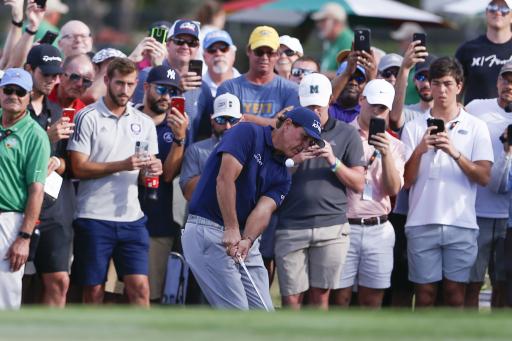 Phil Mickelson is hands down one of the biggest legends that golf has ever and will ever see and there's no doubt that the sport wouldn't be in the strong position it's currently in if it wasn't for this man.

On Tuesday, Mickelson celebrates his 50th birthday and the PGA Tour decided to pay tribute to the five-time major winner by creating a montage of some legendary moments provided by Mickelson. Watch the video below:

Here's to a fan favorite and legendary lefty. pic.twitter.com/pwXPATLGWM

With 51 professional wins, including three Masters victories, Mickelson will always be a legend in golf and after his recent weight loss and some work in the gym, Mickelson's club speed has increased, helping him continue to hit bombs.

Mickelson recently starred in The Match: Champions for Charity where he and NFL legend Tom Brady narrowly lost to Tiger Woods and Peyton Manning, but the four raised $20 million for COVID-19 relief.

The 50-year-old made his return to the PGA Tour at the Charles Schwab Challenge last week, but Mickelson failed to make the cut after shooting level par through his opening two rounds.

Mickelson has received thousands of birthday messages from golf fans on Twitter today and here were some of the kind words found underneath the PGA Tour's video.

"Haha I needed that this morning. Phil’s the best"

"Have a very Happy birthday Phil! Keep hitting those bombs!"

"Gets more likeable with age as well. Great entertainment on and off the course."

"I have not met such a guy who does not like Phil."