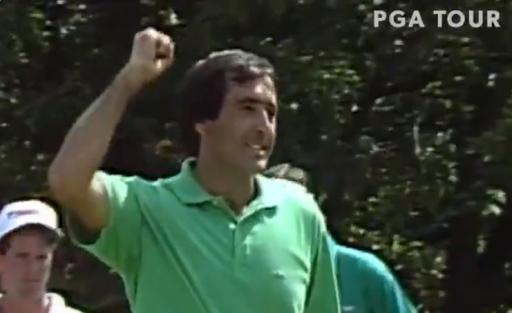 The PGA Tour paid tribute to golf legend Seve Ballesteros on Friday April 9, a day where the Spaniard would have celebrated his 64th birthday.

Ballesteros quickly made a name for himself as one of the most talented golfers to ever grace our sport and he was a true showman, always making sure spectators left tournaments with memories they'd never forget.

As entertaining as he was, Ballesteros was also extremely dominant during his time in professional golf, capturing 90 wins, including five major championships.

The 1979 Open Championship was the first major Ballesteros won and a year later he claimed a four-stroke win at Augusta National to win his first of two green jackets, the second coming three years later in 1983.

Ballesteros would add two more Open Championships to his impressive list of accomplishments, with a two-stroke win over Bernhard Langer and Tom Watson at St Andrews in 1984 and the final major win of his illustrious career in 1988, winning at Royal Lytham & St Annes Golf Club for the second time.

With the second round of the 2021 Masters underway, the PGA Tour posted a video on social media showing highlights of the man that left behind such an incredible legacy.

Remembering one of the game's greats on what would have been his 64th birthday.

Ballesteros was taken far too young, but many players of today's game would not be playing in the biggest tournaments in golf had it not been for his inspiration, with World No.3 Jon Rahm often referring to the effect Ballesteros had on his career.

NEXT PAGE: Abraham Ancer hit with "RIDICULOUS" penalty at The Masters