Adam Hadwin went mad when he made his first-ever PGA Tour hole-in-one on the 16th hole at the Memorial Tournament on Friday. 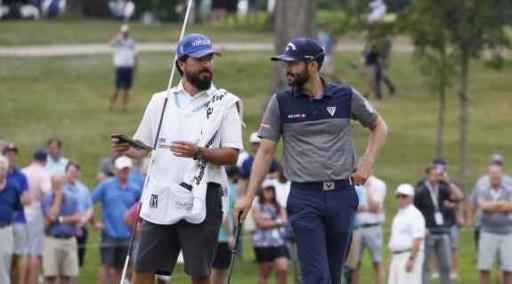 PGA Tour winner Adam Hadwin stepped on to the par-3 16th hole on Friday at the Memorial Tournament. He was about to play the 2,863rd par-3 of his tour career.

The Canadian took a 7-iron out of his bag on the 194-yard hole and he took aim at the pin. He was aiming to recover from his first-round score of 76.

The ball landed on the front of the green and rolled perfectly into the hole. Hadwin threw his club up in the air and celebrated with the fans on the tee box at Muirfield Village.

His first-ever ace took him to 1-under-par for the week and it was the perfect addition to a great round of golf. Despite bogeying the 17th hole, he carded a 68 to get back to level-par for the event.

Earlier in his round, Hadwin made four birdies and an eagle on the par-5 7th hole. He is looking for his second win on the PGA Tour this week in Ohio.

Hadwin is eight shots behind Cameron Smith with the weekend remaining. Smith is looking to become the first player since Tiger Woods in 2001 to win the Memorial and The Players Championship in the same season.

He leads by one shot on 8-under-par from Denny McCarthy and K. H. Lee and by two shots from Davis Riley, Cameron Young, Billy Horschel, Luke List and Jhonattan Vegas.

Rory McIlroy, making just his ninth start of the 2022 season, is three shots behind after carding a 69 on Friday.