Brooks Koepka and his fiancée Jena Sims are in the Turks and Caicos Islands as they enjoy their exotic and luxurious wedding weekend. 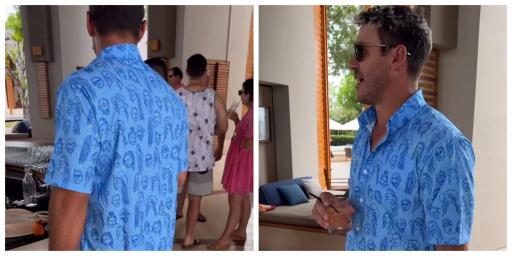 Four-time major champion Brooks Koepka and his fiancée Jena Sims are enjoying a spectacular wedding week in the Turks and Caicos Islands.

The exotic and luxurious destination in the Atlantic Ocean is playing host to the second high-profile PGA Tour wedding of 2022.

Dustin Johnson and Paulina Gretzky have already tied the knot this year and now it is the turn of Koepka and Sims who were first engaged in April 2021.

Sims has been active all over social media, posting pictures on her Instagram story and her regular Instagram page of all the features of their wedding venue.

Related: 13 players withdraw from Porsche European Open on DP World Tour... but why?

The beach paradise looks like the perfect place to get married. Koepka and Sims first began dating in 2017 which was the year of his first win at the US Open.

Their relationship has flourished since and Koepka showed his celebratory mood in the tweet above from Claire Rogers. The 32-year-old has been wearing a t-shirt with his and Sims' face dotted around it.

Koepka certainly looks as though he is relaxed and enjoying his wedding week and it could act as a much-needed break from the PGA Tour where recent success has been few and far between.

We will no doubt see Koepka tee it up at Brookline next week for the US Open. He is a two-time winner of the event and he often excels in major championships with the biggest prizes on the line.