Danielle Kang revealed on Friday that the reason for her back troubles is a spinal tumour which was discovered during medical procedures that targeted the discomfort. 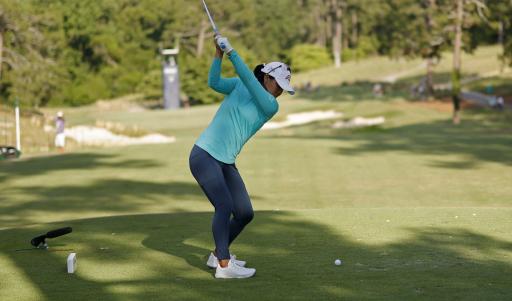 Former Women's PGA Champion Danielle Kang revealed that she had a spinal tumour during the second day of the Women's US Open.

Kang withdrew from the Palos Verdes Championship and missed out on the Cognizant Founders Cup as she dealt with issues in her back.

After medical procedures had been carried out on the area of discomfort, the 29-year-old was diagnosed with a spinal tumour. Despite this concerning verdict, Kang was determined to play at Pine Needles this week.

With rounds of 71 and 74, Kang made the cut on the number at 3-over-par. She is set to tee off with Grace Kim in the third group out in the third round on Saturday.

Related: Hideki Matsuyama DISQUALIFIED from the Memorial after 3-wood marks

"I'm actually doing everything I can. I don't know how to answer these things right now. I don't have all the answers," Kang said after her second round of the US Women’s Open.

"I've been working with (my doctor) and he has been really great, and my physio has gone above and beyond. Same thing with my physio out here. They're just keeping me together.

"My goal is to play this week. I didn't want to miss it. For the last seven, eight weeks I've done everything I can to get here. After this week, I will focus on addressing the issue and then trying to figure it out from there."

Kang secured her sixth LPGA Tour victory at the Hilton Grand Vacations Tournament of Champions in January and she came second in her following appearance at the Gainbridge LPGA at Boca Rio.

Since then, Kang has recorded two top-10 finishes. It goes without saying that we hope she can overcome her tumour as quickly as possible.