PGA Tour pro Justin Lower was distraught after he missed out on the FedEx Cup Playoffs with a bogey on the 72nd hole at the Wyndham Championship. 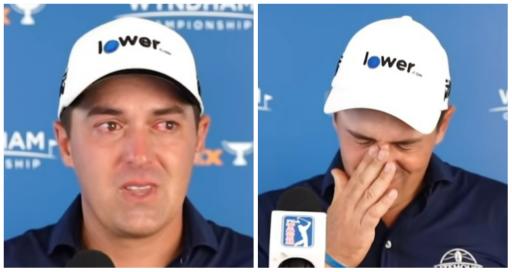 PGA Tour pro Justin Lower was in tears after he came up cruelly short of the FedEx Cup Playoffs.

Lower three-putted his 72nd hole at the Wyndham Championship. A birdie would have guaranteed him a spot. A par a nervous wait.

But the bogey? No bueno. Cue tears. This is why golf is known as one of the cruellest games out there.

The bogey meant that he dropped out of the top 125 players in the points race. His hard luck was Rickie Fowler's gain, who snuck in on the number.

There were also some huge shocks on Sunday, with these players losing their full playing rights for the 2023-2204 season.

Joohyung Kim, pictured, claimed the Wyndham Championship with a thrilling final round

Well, his birdie putt was never going to be in danger of being short. He rolled that thing about six feet by and then his par attempt shaved the edge.

That is an absolutely brutal watch. The 33-year-old simply couldn't believe it.

When asked to describe his emotions, Lower said: "I'd tell you if I could get it out. I don't really know what I'm thinking. It sucks to come up this short really.

"I mean, to get the last card last fall and only have three starts in the fall, to be in this position I guess is, I don't know, it's cool, but obviously had some help with the LIV guys and whatnot.

"I don't even know if I'm allowed to say that. But I don't know, there's positives, but right now it just flat out sucks."

It appears that even on the 18th green at Sedgefield Country Club he wasn't aware of what he needed to do.

He told the media: "I wasn't, honestly. [I] had a feeling obviously with us being the feature group, I mean, obviously Billy [Horschel] and Luke [Donald] are bigger names, Luke being the next European Ryder Cup captain or whatnot.

"[The] cameras were around all day. It's the PGA Tour, there's cameras everywhere. But it just is tough. I didn't know on 18, but I had a feeling.

"I just, that first putt I had was, it was like not the putt you want at all, like I don't even know how long it was.

"I was trying to hit it 50 feet up the hill and try to use the hill to kind of kill it and it died over the edge.

"[I] just hit it a little too hard, because the last thing I want to do is leave it short and have it come back even more."

This was his response a short time later:

We aren’t done fighting! I appreciate everyone who followed along this week! pic.twitter.com/4hu56ysQH5

Next page: How much they all won at the Wyndham Championship