The PGA Tour's brightest young talent Joohyung Kim explains why he chose his nickname "Tom" and his love of Toy Story. 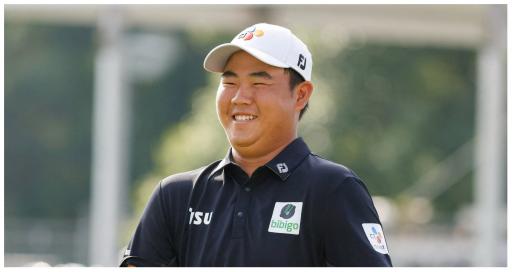 Joohyung "Tom" Kim appears to have come from absolutely nowhere to become one of the PGA Tour's brightest talents.

During his final broadcast yesterday, Sir Nick Faldo gushed over the 20-year-old's swing.

What confused us a few weeks ago was why he was called "Tom". As it turns out, it was because of his love of Thomas The Tank Engine.

It wasn't his parents who gave him the nickname. He was so stubborn that he chose the name himself.

But he could've had a very different one.

During his winner's press conference after picking up a huge check at the Wyndham Championship, he outlined the story.

"I loved the show as a kid. I haven't watched it or anything, but apparently I really loved the train," he said.

"I was like, you know what, I'm going to name myself Thomas. I haven't told anyone this, but I've actually had a few more names that I could have named myself and I'm glad I didn't, but I went with Thomas.

"And as years went on, people started calling me Tom, it was shorter, so I kind of went with Tom after that."

Well, what were some of the others he had in mind?

He joked: "Do you guys really want to know? I was a big Toy Story fan, so I almost named myself Buzz Lightyear.

"That was a close one there's a few more. It's actually, it's not an English character, it's actually an Asian character, but Buzz Lightyear was probably the closest one to Thomas."

Kim, who claimed the win by five strokes to earn a spot in the FedEx Cup Playoffs, also began his tournament at Sedgefield Country Club with a quadruple bogey.

"Yeah, it's crazy. I mean, I've never won a golf tournament starting with a quad," he joked.

Still, it's been a crazy month for Kim.

He said: "Just before the Scottish I was just trying to get enough points to get in Korn Ferry Finals, and finishing third there, you know, finishing third, I think I was zero points, how many points away from getting special temporary membership, I had to make the cut at The Open and I did.

"I played 3M, Detroit and Wyndham and really it's been a five-week stretch for me, but it feels like three months.

"Yeah, it's been a hectic month and a lot of things have changed, for sure."

Next page: Pro in tears after brutal three-putt to miss out on playoffs