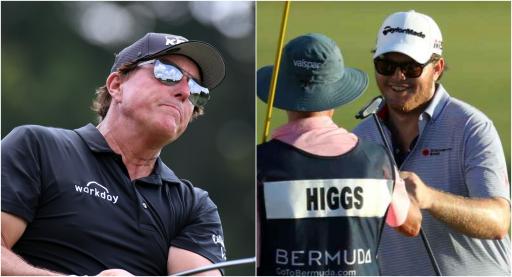 After a great build-up and an entertaining match, Phil Mickelson and Joel Dahmen overcame Harry Higgs and Keith Mitchell in a lighthearted match at Liberty National Golf Club.

Before the start of the WGC-FedEx St. Jude Invitational which was won by Abraham Ancer, Higgs told a fan on social media that Lefty "wouldn't be ready for his trash talk" if the pair went toe to toe on the golf course.

So the match was arranged for Tuesday morning at 10 am local time at Liberty National, the home of the Northern Trust and the first leg of the FedEx Cup Playoffs.

Things started badly for Higgs as his partner Mitchell found the water with his first tee shot, but the pair managed to go 2 up through the first four holes.

Phil walking onto the first tee:

“I’m hitting a Callaway with a jumping me on it, it’s from when I won the Masters. What are you guys using?” pic.twitter.com/jMiZVCTPRb

Mickelson and Dahmen battled back with birdies at the 5th and 7th holes, while the six-time major champion made a fantastic eagle at the 6th hole to help turn the match around.

While the tussle was going on in New Jersey, Mickelson was providing his fans with constant updates on his Twitter page, informing them of how the match was panning out.

Late in the day on the 17th hole, Mickelson called out to Dahmen. "Let’s end this with an exclamation point," and Dahmen delivered by rolling in a 30-foot birdie putt to secure the 3&1 win for his pair.

"I think we were all looking forward to playing today, which is great," said Mickelson.

"We had a great time, and we had the right outcome, really. I think we had the outcome we all really certainly expecting, and I think, hoping for."

3&1 is the final ladies and gentlemen. Joel earns the title “DaMan” with a third birdie in a row and put us 1 up on the press too

Although the day ended in defeat for Higgs, he enjoyed the banter and nature of the match and also, the 29-year-old relished sharing the fairways with a legend of the game.

"I ran my big mouth and a Hall of Famer put me in my place," said Higgs.

"I had a few nerves at times, it mattered a little bit. You want to beat Phil and anyone else you are playing with, but the lead up to it created some nerves."