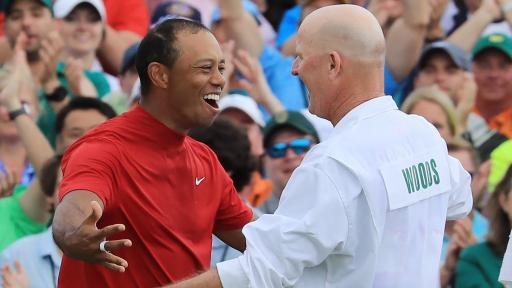 The move has come about after Cantlay's regular caddie Matt Minister was forced to bypass this week's first Playoffs event due to testing positive for Covid.

Tiger’s caddie Joe LaCava is on the bag for Patrick Cantlay at the Northern Trust this week.

Just a fill-in gig as Cantlay’s full time looper, Matt Minister, is out with COVID-19. pic.twitter.com/4E8Xk53EaU

"He’s going to have to put up with the scrub caddie this week," LaCava told Golf Digest.

Cantlay, who has won twice this season, currently sits third in the season-long FedEx Cup race that ends in the first week of September at the Tour Championship at East Lake.

The World No.9 is currently 11th in the US Ryder Cup standings - so outside the automatic top-six for a debut Ryder Cup appearance - but you would have to believe he is a lock for one of captain Steve Stricker's six captain picks.

LaCava was last seen caddying for Woods at the father-son PNC Championship at the end of 2020 when Tiger teamed up with his son Charlie for a tie for fifth.

That was the last time Woods teed it up in competitive action before his horror car crash in Los Angeles back in February.

LaCava was hired by Woods back in September 2011, and he was on the bag for his famous win at the 2019 Masters.

He began his career in 1987 looping for his cousin Ken Green before Fred Couples hired him in 1990.

LaCava, who has also caddied in the past for Dustin Johnson, most recently stood in to caddie for Couples en route to a tie for sixth at the Principal Charity Classic on the PGA Tour Champions.