Phil Mickelson is one of the four players who was recently offered $30 million to join the Premier Golf League. 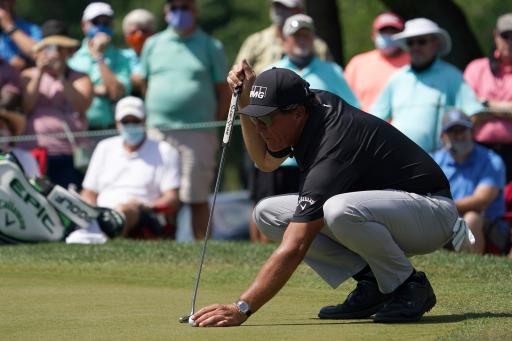 Whilst most top players are condemning the proposed Premier Golf League, Phil Mickelson's comments were slightly different and it sounds as though the iconic golf star would consider taking part.

The Saudi-backed breakaway golf tour was once again in the headlines this week after The Telegraph revealed that Mickelson had been offered $30 million to join the PGL, along with Dustin Johnson, Brooks Koepka and Justin Rose.

Some reports suggested the F1-style tour was set to change its name to the Super Golf League, although it seems no matter which name it chooses, it could struggle to get off the ground, due to players at the highest level saying they would have no interest in joining.

Rory McIlroy spoke in detail on Wednesday saying that he was still "very much against" the PGL, whilst World No.2 Justin Thomas also made it clear that his intentions are to break records on the PGA Tour.

“I don't know where it's going to go because everybody feels differently and everybody's in different places in their career,” Thomas said. “For me, I personally am about being No. 1 in the world and winning as many majors as I can and winning as many tournaments as I can and doing historical things on the PGA Tour. If I was to go do that, then all those things go down the drain and I can't do that.”

Mickelson, who has been a face for the PGA Tour for decades, made slightly different comments, suggesting that he finds the PGL's plans "interesting" and believes it would be something that golf fans would love to watch.

“It’s interesting. I think it’s very interesting. What’s interesting is the players would be giving up control of their schedule and then compete against each other 14 times or 15 times or whatever the final number is,” Mickelson told the media ahead of this week's Wells Fargo Championship.

“We all make a lot of money and do very well and we control our own schedule and I don’t know if guys would be willing to do that,” Mickelson said. “I think it would be a selfless act. Even though their schedules are being appreciated financially, it would take a lot to give up control of that even though the entire sport would benefit.

“Even though the fans would love it and get to see the best guys play more often and there would be global events. Imagine all the best players having to go global what that would do for the game.”

PGA Tour commissioner Jay Monahan is yet to make a statement following the PGL's recent move for some of the biggest names in the game, but multiple reports have suggested that any player who decides to join will be banned from the PGA Tour, which would also mean giving up any potential spots in Ryder Cup teams.