Phil Mickelson is sitting at the top of the leaderboard after the opening round of the Wells Fargo Championship. 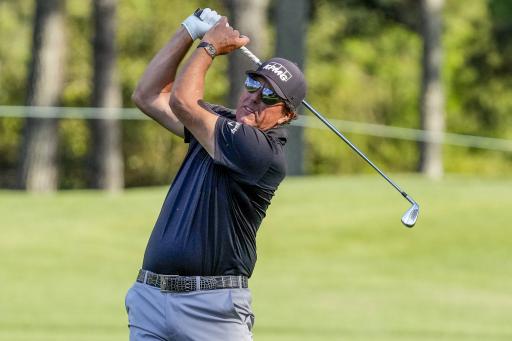 Phil Mickelson produced one of his best opening rounds in years on the PGA Tour on Thursday, shooting 7-under par to take the lead at the Wells Fargo Championship and he did so with an interesting new club in his bag.

The five-time major champion had been in seriously poor form heading into this event, but it was great to see Mickelson show the world that he can still produce magical rounds like the one he did at Quail Hollow.

Having slipped to 115th in the world rankings, Mickelson's game has been far from his best, but most noticeably with his driver, which has caused him serious trouble from the tee.

Heading into the Wells Fargo Championship, Mickelson was raned 194th in Strokes Gained Off The Tee, a worrying statistic, but thanks to an interesting new club in the bag, the 50-year-old was No.1 in that statistic on Thursday, picking up 2.28 shots against the field.

“It's just kind of a mini driver head that I use as a strong 3-wood, and out here, because the fairways are so firm, if I hit it low enough, I'm able to get a lot of chase out of it and I don't feel like I'm sacrificing any distance," Mickelson said. "So that allows me to kind of keep my misses a lot tighter. Today I hit it very successful, I hit a lot of good shots with it.”

Mickelson played alongside Joel Dahmen for the opening round and the two were looking forward to playing side-by-side, with Dahmen starting the banter earlier in the week, announcing on social media his eagerness to play with "the Champions Tour's best".

Dahmen showed his class during the opening round too, shooting a 3-under par round of 68 and Mickelson spoke highly of the 33-year-old on Thursday, appreciating his attitude and humour on the golf course.

“I mean, I love the banter,” Mickelson said of the pairing with Dahmen. “I think it's funny, and it kept the atmosphere in our group really light. We laughed a bunch. We had some fun things to talk about, but we were laughing even before we teed off. I like how he's able to laugh at ourselves and have fun with the game of golf and not take it too serious.”

NEXT PAGE: Charles Barkley has a NEW SWING and golf fans are loving it