Phil Mickelson shot a superb first-round score of 7-under-par to take the lead at the Wells Fargo Championship on Thursday. 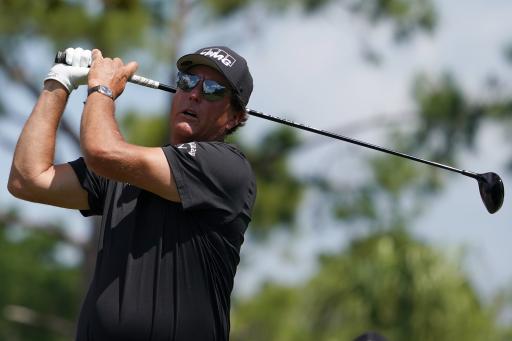 Phil Mickelson rolled back the years at the Wells Fargo Championship on Thursday to take the first-round lead on 7-under-par.

The five-time major champion made five birdies on his first nine at Quail Hollow Golf Club, as he made a solid start at the venue where he came second to Rory McIlroy in 2010.

The popular lefty bogeyed the 11th hole, but this didn't upset his rhythm as he made another three birdies to shoot a superb 64, including some trademark up-and-downs from the 50-year-old.

Phil is bringing the thrill.

Kyoung-Hoon Lee set the early pace in North Carolina with a 5-under-par 66, which included six birdies and one bogey on the scorecard.

Lee, who came second behind Brooks Koepka at the Waste Management Phoenix Open in February, will start the second round at the Wells Fargo Championship two behind Mickelson in second place.

A whole host of players sit three behind on 4-under-par including Englishman Tommy Fleetwood, who managed three birdies and a fantastic eagle on the par-5 10th hole.

Related Articles
How to live stream the Sanderson Farms Championship for free online
"Go get that, dad!" Jordan Spieth will take on Tiger Woods (we hope) at PNC

Fleetwood, still looking for his first win on the PGA Tour, shares a tie for third place with five other players and three shots off the lead heading into Friday.

McIlroy and Bryson DeChambeau and both made their long-awaited returns to the PGA Tour, but they struggled to make an impact on Thursday in North Carolina.

DeChambeau was enjoying a steady round of golf until the par-5 15th hole, where the big-hitting American made a damaging double-bogey and he would finish on 1-under-par and six shots behind Mickelson.

McIlroy made three bogies in his first round at the Wells Fargo Championship, meaning he would finish on 1-over-par heading into Friday.

NEXT PAGE: IAN POULTER SHOOTS OPENING-ROUND 72 ALONGSIDE SON LUKE AS HIS CADDIE