Phil Mickelson is in Detroit for his first appearance at the Rocket Mortgage Classic this week, but an old story has been dredged up that linked Lefty to an alleged mob bookmaker. 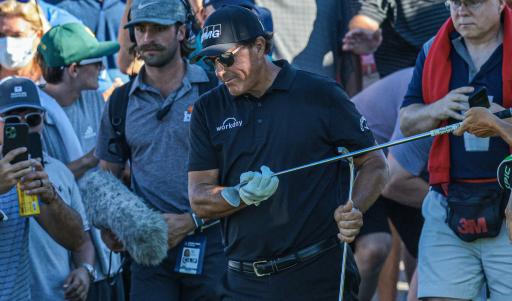 Phil Mickelson is looking to build on what has been a memorable season in 2021 so far, but a 23-year-old story from the Detroit News has added a slightly sour taste to his week.

Lefty is back in Detroit to play in the Rocket Mortgage Classic for the first time, but a story has resurfaced from 1997 which linked him to a mob-connected bookmaker, 'Dandy' Don DeSeranno.

Glenn Cohen, who is Mickelson's attorney, explained to ESPN what happened in the case over 20 years ago, a case in which the six-time major champion was absolutely cleared of any wrongdoing and could've been part of a $500,000 win.

Took place 23 years ago. Had I not come here to Detroit it wouldn’t have run.
My mistake making the effort to be here and have my foundation look into ways to help the local community. Didn’t even think of the opportunistic Rob Snells in the area would try and take advantage

"Phil and a bunch of buddies were betting on sports and they pooled their money and they made a large bet. The bottom line is Phil wasn't paid," said Cohen.

"The guy who took the bet turned out to be a crook and Phil didn't know it. But it's irrelevant. Whether this guy was the worst human being alive or had anything to do with Jimmy Hoffa's disappearance, what is the newsworthiness of this article now? There isn't any."

The story was re-written by Robert Snell of the Detroit News and there is confusion as to why this story has been re-released.

Mickelson couldn't hide his frustration and tweeted his views in response to the story, stating how he intends to use his foundation to help local communities in Detroit.

The 45-time PGA Tour winner feels that if he had chosen not to play in the Rocket Mortgage Classic at Detroit Golf Club, then there would have been no need to bring it to the surface again.

Although Mickelson was expected not to comment in any capacity on the matter, it seems he wanted to express his views on something he feels strongly about.