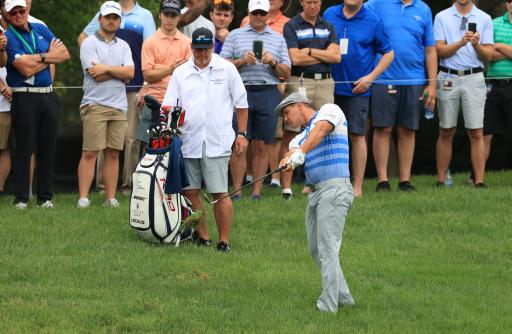 Bryson DeChambeau has split with his long-term caddie Tim Tucker ahead of this week's Rocket Mortgage Classic.

No Laying Up first broke the news on social media earlier today, citing that DeChambeau and Tucker had been together in the practice rounds at Detroit Golf Club but have parted ways before the first round on Thursday.

One source is claiming Tucker has decided to quit.

No Laying Up believes someone from DeChambeau's sponsor Cobra Puma Golf will be stepping in to caddie for the defending champion this week.

Phil Mickelson has already had his say on the matter.

it was just an 8 iron

Golf Channel's Ryan Lavner has since confirmed the news.

Can confirm what @NoLayingUp said: Bryson and caddie Tim Tucker have parted ways. Bryson has Cobra's Ben Schomin on the bag this week in Detroit.

Bryson's agent Brett Falkoff tells me: "In any relationship they run their course, and that's what happened here."

There will no doubt be more on this story over the coming days.

DeChambeau has known Tucker for the best part of 12 years.

The pair began working together at the 2016 Memorial Tournament until the middle of the 2017 season, before DeChambeau briefly switched to the services of Micah Fugitt.

That partnership, however, lasted less than six months and Tucker was back once again on the bag of DeChambeau.

RELATED: WHO IS BRYSON DECHAMBEAU'S GIRLFRIEND

Tucker has been on the bag for all of DeChambeau's eight PGA Tour victories, including his maiden major triumph at the 2020 US Open.

DeChambeau once said of Tucker: "I think the biggest thing is that he’s a calming effect on me. He’s super easy and cool and collected. Whatever I say, it doesn’t bother him at all. We just go out there and have a good time."

NEXT PAGE: PETER FINCH HITS BACK AT OPEN QUALIFYING CRITICISM FROM RICK SHIELS AND HIS MANAGER