Luke Poulter caddied for his dad on the PGA Tour for the first time at the Wells Fargo Championship on Thursday. 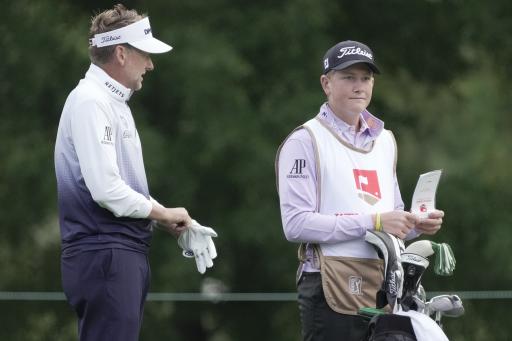 Ian Poulter made four birdies and five bogeys to shoot 1-over-par in his opening round at the Wells Fargo Championship, with his son Luke on the bag for the first time.

Poulter announced in April that Luke would be caddying for him this week at Quail Hollow Golf Club, and both were very excited to team up together.

The Englishman posted to his Instagram page after his 72 on Thursday to re-assess his day and how he and his son worked together on the course.

"Great discussion with Luke on the 16th hole today. We were trying to work out where the wind kept switching to, it was not easy today. Some great lessons for me as well as Luke," wrote Poulter.

"After 3 bogies to start we did a great job to fight back and we can hopefully move back up during Friday's round. Luke did an amazing job today and it was an incredible experience for me to spend more valuable time with him. He has grown into an amazing young man.

"I love trying to help with his growth as an aspiring young golfer. Father son dreams."

The World No. 64 usually has his long-term caddie Terry Mundy on the course with him, and he will be looking to build on his respectable first-round score.

Related Articles
How to live stream the Sanderson Farms Championship for free online
"Go get that, dad!" Jordan Spieth will take on Tiger Woods (we hope) at PNC

Much like Lee Westwood and Stewart Cink who have both had their sons caddie for them on the PGA Tour this season, the team of Ian and Luke Poulter could become a common feature in the coming weeks.