Check out some of the biggest profits made on Phil Mickelson's victory at the US PGA Championship last week... 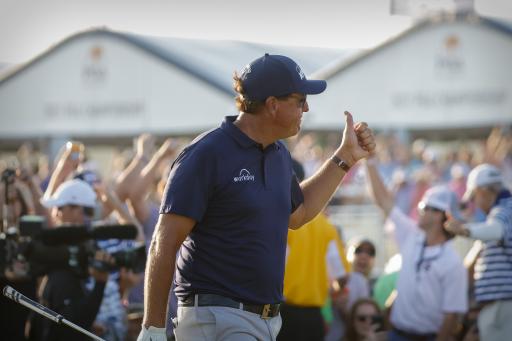 Phil Mickelson may have scooped more than $2 million for his victory at the US PGA last week, but a number of golf punters around the world also won big on the oldest major champion of all time.

Mickelson, who prevailed by two shots for his sixth career major title at Kiawah Island on Sunday, landed odds of 300/1 with some bookmakers at the start of the week.

One punter took full advantage of those lofty odds for Lefty and his $1,000 outright win punt landed him a profit of $300,000 over at DratKings Sportsbook.

While that was the biggest payout we have heard on Mickelson winning the US PGA so far, there were some other outrageous bets landed.

One of which included a ridiculous $60 double bet of Mickelson winning the tournament along with a LeBron James and LA Lakes win player performance bet against the Golden State Warriors.

A bettor won $61K by parlaying a Lebron Performance Double and Phil Mickelson together.

Both bets landed and it resulted in an incredible $41,000 profit for the punter.

Fancy lumping on Mickelson to complete the career grand slam at this year's US Open at Torrey Pines, a venue he has won at three times before?

Well, unfortunately the price isn't quite as appealing as last week at the US PGA, but you can still get your hands on 50/1... and even that price is disappearing fast.

NEXT PAGE: MICKELSON SET TO PUT EVERYTHING INTO COMPLETING THE CAREER GRAND SLAM AT THE US OPEN

DP World Tour
Viktor Hovland shows off his new Phil Mickelson CALVES in Abu Dhabi
PGA Tour
Kevin Kisner on Ryder Cup selection disappointments: "They don't like me"
PGA Tour
Bryson DeChambeau coy on Saudi International talk: "That's the end of the story"
Features
Six controversies we'd like to see in 2022 on PGA Tour & beyond
PGA Tour
Shane Lowry on playing the Saudi International: "I'm a golfer, not a politician"