Phil Mickelson was given a special exemption to play at the US Open this year and he will have the chance to win the career grand slam in his home city. 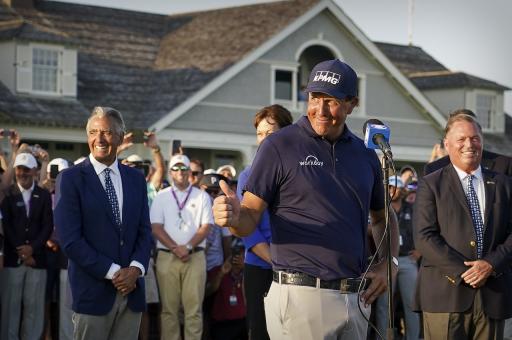 Phil Mickelson has vowed to "put everything" into winning the US Open at Torrey Pines in June, a course located in his home city of San Diego, California.

The 50-year-old received a special exemption to play in the tournament, as he was unlikely to qualify and he will now have the opportunity to win his first US Open.

Mickelson became the oldest ever major winner at the PGA Championship last week, joining Lee Trevino and Sir Nick Faldo on six major titles. He could join another illustrious list of career grand slam winners if he was to win at Torrey Pines in June.

"If I'm being realistic, it's very possible that this is the last tournament I ever win," said Mickelson after his victory.

"I've believed for some time now, without success, that I could play at my best and compete in major championships still, but, until this week, I haven't proven it to myself or anyone else.

Gene Sarazen, Ben Hogan, Gary Player, Jack Nicklaus and Tiger Woods have won all four majors but the career grand slam has incredibly alluded Mickelson, who has finished second at the US Open six times.

Mickelson has made 31 appearances at the US Open and has only missed one since 1994. His most recent runner-up finish at the tournament came in 2013 when Justin Rose won his first major title at Merion

"But I do believe that if I stay sharp mentally I can play well at Torrey Pines," added Mickelson.

"I'll take two weeks off before that and go out to Torrey and spend time on the greens and really try to be sharp for that week because I know that I'm playing well and this could very well be my last really good opportunity, although I get five more to win a US Open.

"So I'm going to put everything I have into it."