After their win at the PNC Championship at the weekend, we thought it was right to dig out this great footage of John Daly and his son John II watching one of his finest moments from 1991. 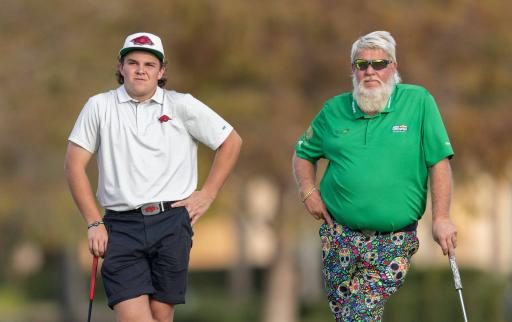 John Daly described playing and winning a PGA Tour event alongside his son John II as one of the highlights of his life.

Team Daly fired a fantastic score of 57 in the final round of the PNC Championship to finish two shots clear of the valiant Tiger Woods and his son Charlie.

John II was extremely impressive throughout the 36-hole scramble event and he showed the same style and flamboyance that his popular father used to show on the PGA Tour.

After their impressive victory at the Ritz-Carlton Golf Club in Orlando, a video resurfaced of the Daly duo being shown footage of the 55-year-old's incredible win at the 1991 PGA Championship at Crooked Stick.

That year, Daly was the ninth alternate for the field after a number of withdrawals. When Nick Price pulled out due to the birth of his child, Daly received a call on the Wednesday before the tournament.

"That's when your pop could hit it as far as you."

John Daly and his son relive the 1991 PGA Championship together. pic.twitter.com/WpOuTguNjd

He arrived at the course without playing a practice round but he acquired the services of Jeff Medlin, who was Price's caddie.

All of the odds were stacked against Daly who was in his PGA Tour rookie season. He incredibly shot rounds of 69, 67, 69 and 71 to finish three shots ahead of Bruce Lietzke.

It is one of the great underdog stories in golf history and Daly and his son reminisced about the tournament together when they were shown the footage.

"That's when your pop could hit it as far as you!" Daly said.

"It was a great moment in my life, my rookie year and apparently it was the longest golf course on tour that year. I kind of liked this because it played pretty short for me.

RELATED: PGA TOUR CLEARS THE WAY FOR PLAYERS TO COMPETE IN THE SAUDI INTERNATIONAL

"I'd already secured my card for 1992 which was my goal and just to win, that topped it all off. Not knowing what it gave me, a 10-year exemption, 10 years in majors back then, so I was set for 10 years and at that time, you wanted something like that.

John II is currently in his first year on the golf team at the University of Arkansas. The 18-year-old's aim is to be on the PGA Tour one day, having been associated with it through his father for so long.

Apparently, young John gets the better of old John nowadays but in their sixth appearance at the PNC Championship, they worked perfectly as a team.

NEXT PAGE: BRYSON DECHAMBEAU CREATES YOUTUBE VIDEO TO PROVE HE IS NOT ON STEROIDS