Rick Lamb stepped up to the plate in the playoff of the Honda Classic Monday Qualifier and he made an amazing eagle to seal the deal. 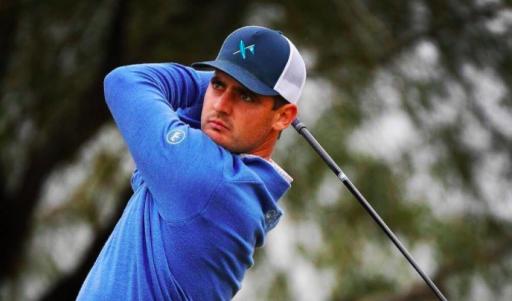 At a tournament where a 16-man playoff decided the last qualifying spot for the Honda Classic, there was never going to be a boring ending.

Rick Lamb provided a clinic in shotmaking and stepping up to the plate. The 31-year-old emerged from the three-group playoff at Banyan Cay Resort and Golf to make it to the Bear Trap.

In regulation play, Sam Stevens, Martin Contini and Fabian Gomez were the top three players on the leaderboard. They took three of the top four qualifying spots.

There were 16 players tied on 5-under-par including PGA Tour winners David Lingmerth and DJ Trahan. But it was Lamb who came out on top on Tuesday morning.

They teed off on the 10th hole in Florida in two groups of five and one group of six. Lamb hit a great drive and then hit his approach with a 4-iron to 35 feet.

RELATED: A GUIDE TO THE BEAR TRAP: "IT SHOULD BE WON OR LOST RIGHT HERE"

Monday Qualifiers to advance to @TheHondaClassic:

He rolled in the monster putt for an eagle and the other 15 competitors couldn't match this score. It will be Lamb's first start on the PGA Tour since the 2021 US Open.

"I played in a Korn Ferry playoff. That one was a little better because they gave you a check at the end of it. This is a great opportunity, and it's cool to get in, but the hard work hasn't even started yet," Lamb said afterwards.

He is certainly correct about the hard work beginning. PGA National is one of the toughest challenges that the PGA Tour offers with holes 15 to 17 being one of the hardest stretches on the circuit.

It is fair to say that he will never be involved in a playoff-like this again, but Monday Qualifiers always throw up incredible situations.