"Really?" Justin Thomas defends HVIII over his comments about Hoffmann 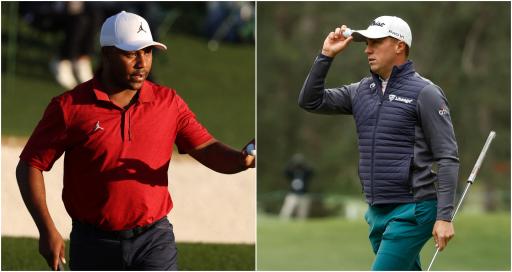 Justin Thomas took to social media to defend Harold Varner III after his comments about Morgan Hoffmann caused quite a stir.

Varner spoke to the media after his first round at RBC Heritage earlier in the week where Hoffmann had returned after two years out.

Hoffmann was diagnosed with muscular dystrophy five years ago and has been living in Costa Rica in search of alternative treatments.

He shot a level par round on his return at Harbour Town Golf Links but missed the cut after finishing at 1-over par after 36 holes.

Varner played his first round alongside Hoffmann along with England's Matthew Fitzpatrick.

After they played, Varner was asked a few questions about what he thought of Hoffmann's game despite being out for so long.

What were his impressions of it?

"He's still good at golf. It's like riding a bike. Obviously it's going to take a while to get the rust off, but it's just good to see him," he said.

"The last time I saw him was actually here probably three years ago here.

"We played together, and he wanted to go fly and watch the Canes play and then come back and play a round. I'm like, no, I'm good man."

Varner was asked if he saw anything different in his game, as well.

He replied: "I did not, but I'm not a very aware person, never have been. I'm out there to beat Morgan.

"I don't really care -- I get that he's been through a lot, but everyone on this planet's going to go through something, and that's his battle.

"My battle may come down the road later.

"When you're on the golf course, it's time to compete. I want to win. I don't know. That's kind of messed up, but it is what it is."

Taken out of context that those comments could come across a little bit different.

Though it has to be said, it is a vintage and unfiltered response from Varner, isn't it?

The headline has since been changed but Thomas picked up on it straight away to defend Varner.

More: How much Ted Scott has won on the bag for Scheffler

Hoffmann last played on the PGA Tour in October 2019. He wrote a lengthy piece in The Players' Tribune about his battle.

Now 32 years old, he has returned and is playing on a major medical exemption on the PGA Tour.

He needs to earn 238 FedEx Cup points to retain his playing rights.

Earlier in the week he was asked what his expecations were for his return.

Hoffmann had the perfect response: "Some smiles. Some golf on a beautiful course. That's really about it.

"I have a great caddie on the bag this week and my clubs are dialed in, so I feel good. I don't really know.

"Obviously you come to tournaments to win and I've never done that before, so might as well shoot for the stars, right?"