Jon Rahm has finished in the top three in his last three appearances on the PGA Tour and he was in unstoppable form again at the BMW Championship. 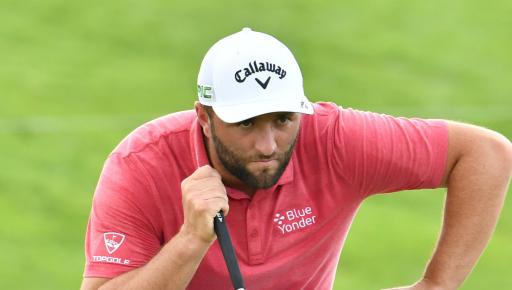 Jon Rahm hit the front yet again in the first round of the BMW Championship, firing a round of 8-under-par to share the lead with American Sam Burns.

The Spaniard won this tournament last season after beating Dustin Johnson in a superstar playoff and he made another superb start at Caves Valley Golf Club with five birdies on the front nine.

Rahm added birdies at the 12th, 14th and 17th holes to complete a bogey-free round of 64. It was also his eighth consecutive round in the 60's on the PGA Tour.

The World No. 1 seems to be in contention every week. He has made a staggering 13 top-10 finishes in his last 20 appearances on the PGA Tour, including his maiden major victory at the US Open.

As well as Rahm, Burns has also had a breakthrough season in 2021. He won his first PGA Tour title at the Valspar Championship earlier in the year and he, unfortunately, lost in a playoff to Abraham Ancer at the WGC-FedEx St. Jude Invitational two weeks ago.

The 25-year-old made four birdies on both his front nine and his back nine to also shoot a bogey-free round of 8-under-par. He and Rahm currently hold a two-shot lead ahead of Ancer on 6-under-par.

Fresh off his win at the Northern Trust at Liberty National last week, Tony Finau shot a solid score of 5-under-par in Maryland in round one to sit three shots behind the leaders.

The current FedEx Cup points leader had an extraordinary back nine on Thursday, making one par, six birdies, one bogey and a double-bogey on his way to a 67.