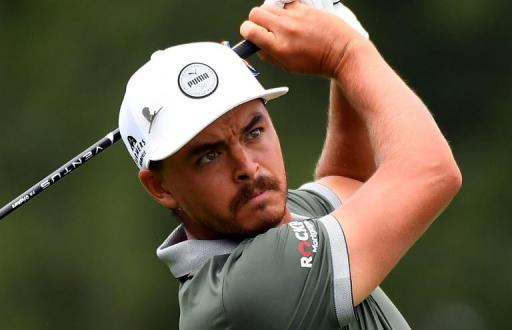 Rickie Fowler has confirmed he has switched into graphite shafts in his irons - just like Bryson DeChambeau - as he looks to play his way back into form on the PGA Tour and book his ticket for The Masters in April.

Fowler, 32, has not made a top-10 finish on the PGA Tour since last year's American Express - a tournament he is competing in this week where he finds himself in a tie for 37th after 36 holes.

As a result of his lacklustre form the past 12 months, Fowler has slumped to 60th in the Official World Golf Rankings and that marks his worst position since April 2010.

The five-time PGA Tour winner is also currently ineligible to compete in The Masters this April as things stand. Fowler has not missed The Masters since making his first appearance at Augusta National in 2011.

In a bid to turn things around quickly, Fowler has been working tirelessly during the off-season with Cobra Golf's PGA Tour rep Ben Schomin and has decided to mix things up when it comes to his equipment.

The biggest change for Fowler is a move into a 125-gram version of Mitsubishi's MMT TX shafts in his irons, something that Mexico's Abraham Ancer has favoured for the past two years on the PGA Tour. DeChambeau is another big-name player who uses graphite shafts in his irons.

According to Fowler, his dispersion pattern has tightened significantly since using graphite irons, and he has since requested for a full set to be made for his new proto irons.

"I was playing them the last few weeks at home," said Fowler, who fired an improved 6-under 66 on the South Course on day two of The American Express to move to 5-under par for the week.

"Not really an adjustment or anuthing. Graphite is a bit more expensive, so it's not like all of golf is going to go that way, but what they are able to do with graphite and how they can manipulate the shafts like they do with the drivers, they can almost build a shaft almost specifically for each iron."

He added: "Flight-wise, everything tightened up. The numbers were pretty similar. Like I said, not a big adjustment. I was really impressed with them. It's been fun playing with them the last month or so."

Fowler has made a number of other changes to his bag this month, including a decision to bench his trusty Scotty Cameron putter in favour of a new mallet putter. He is also using a new version of TaylorMade's TP5 pix golf ball.