Have you ever thought about the life of a PGA Tour caddie touring the United States with their player? Well here is a short but fascinating insight. 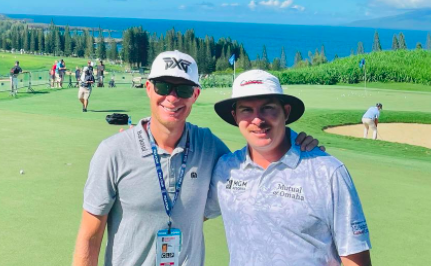 Geno Bonnalie, the PGA Tour caddie for Joel Dahmen, is one of the most entertaining yet understated people inside the ropes on the circuit.

He may not be a name that every golf fan has heard of, but his social media feeds always supply an interesting insight into the life of a caddie and a player on the PGA Tour.

One of Bonnalie's finest moments came back in September 2020 during the rescheduled US Open which was emphatically won by Bryson DeChambeau.

Bonnalie did a video review of his hotel room that week in New York and although it might not have been entertaining for him to stay in this awful accommodation, it was certainly fun for golf fans to hear his review.

For a caddie, lodging near Pebble can be a little expensive...But not when you divide that shit by 4!! pic.twitter.com/H5AepQgCHZ

Fast forward to the Sony Open in January this year, with minutes to go before Dahmen teed off in the first round, Bonnalie went and got his friend a hotdog that he gleefully dispatched.

"How athletes fuel," Bonnalie wrote as the one-time PGA Tour winner chomped on his pre-round snack.

And now this week, Bonnalie has posted a picture of his accommodation at Pebble Beach to work for Dahmen at the AT&T Pro-Am.

"For a caddie, lodging near Pebble can be a little expensive...But not when you divide that s*** by 4!!" Bonnalie tweeted on Monday.

When your Airbnb cancels on you the day you arrive to the US Open: pic.twitter.com/1krlMq6r90

As you can see in the image above, the room looks fairly small and the four beds are packed with the clothes and equipment of other caddies, or possibly players.

When watching the PGA Tour on television, we as golf fans never sit and ponder the preparation and logistics that go into each player and caddie's participation.

Where do they go after their round? Where do they rest before they tee off? How difficult is it to book hotels for an event? Accounts like Bonnalie's offer a small but great view into these aspects of a caddie and a player's career.

Dahmen is making his fourth appearance of 2022 at the AT&T Pebble Beach Pro-Am. He missed the cut at the Sony Open and also last week's Farmers Insurance Open.

NEXT PAGE: GOLF RULES: CAN I PLAY HOLES OUT OF ORDER IF I'M STUCK BEHIND DAWDLERS?