Rory McIlroy admits Keith Mitchell is "a hell of a player"

McIlroy heaps praise on Mitchell at The CJ Cup on the PGA Tour. 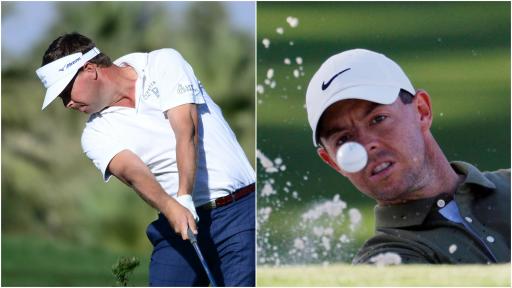 Keith Mitchell may have surprised some people with his opening 10-under 62 on day one of The CJ Cup, but not Rory McIlroy.

McIlroy carded a solid 4-under par opening round at The Summit Club, but that fell six shots shy of Mitchell, who went round in a blistering 10-under 62.

The talent runs deep on TOUR.@McIlroyRory can attest after battling @K_M_Mitchell on Sunday last season. pic.twitter.com/ncrIpahBdk

Despite missing his first two cuts of the new PGA Tour season, Mitchell posted a flawless round of 10 birdies and eight pars to lie just one shot adrift of compatriot Robert Streb on day one.

Only McIlroy had already spoken of Mitchell's qualities on Wednesday.

"This is a very anecdotal story, but [I] played the final round with him at Quail Hollow last season and he was leading," said McIlroy prior to this week's tournament.

"He was maybe one ahead of me or whatever it was. He came out and he hits it in the left bunker on 1, hits an unbelievable 7-iron to like 10 feet and holes the putt.

"I just – [fields are] so deep that people wouldn't maybe pick a Keith Mitchell to win a tournament at the start of a week, but you play with him in a final round on a Sunday, he stopped me in my tracks. I was like, he is a hell of a player."

Mitchell has just one PGA Tour victory to his name so far, coming at the 2019 Honda Classic at PGA National.

The 29-year-old American was asked what he made of McIlroy's comments following his first-round 62, and he was over the moon.

"Anything Rory says is always taken to heart because he is probably one of the most looked-up-to guys out here," said Mitchell.

"He always says the right thing and he always means it when he says it, and for him to say something about me, it means a lot because right now he's always – not right now, he's always been one of the superstars out here.

"So, for him to say that, just coming from such a quality guy is really cool."

NEXT PAGE: RORY MCILROY BELIEVES ON HIS DAY HE IS THE BEST PLAYER IN THE WORLD