Keith Mitchell fired a second-round score of 64 to lead by five shots in the clubhouse at The Summit Club. 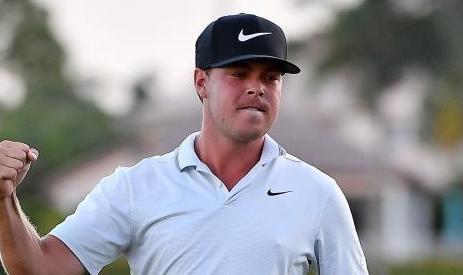 Keith Mitchell surged into a commanding lead in the second round of the CJ Cup, carding a 64 on Friday to hit 18-under-par in Las Vegas.

By playing his first 36 holes in 126 shots, Mitchell set the record for the lowest score after two rounds in the short history of the CJ Cup.

After being described by Rory McIlroy as a "hell of a player", Mitchell began his second round in perfect fashion with four birdies and an eagle in his first nine holes.

Mitchell, in search of his second win on the PGA Tour, is the first player to play the opening two rounds of a PGA Tour event in 126 shots or better since Russell Henley at the Wyndham Championship.

.@K_M_Mitchell sticks it to 2ft and knocks down the putt to tie the lead at -11. pic.twitter.com/jZM3Wb4aao

After perfecting an incredible flop-shot on Thursday, Spieth carded a 65 in the second round which featured an eagle, eight birdies and three bogeys.

Rickie Fowler continued to show signs that he has returned to his best form after shooting his second consecutive round of 66 at The Summit Club.

RELATED: RORY MCILROY ADMITS KEITH MITCHELL IS "A HELL OF A PLAYER"

Having been to visit his old coach and legendary golf tutor Butch Harmon before the tournament, the 32-year-old impressively sits on 12-under-par heading into the weekend.

Englishman Tyrrell Hatton carded a 65 on Friday to reach the same score as Fowler, while his fellow countryman Ian Poulter is a shot further back on 11-under-par.

Team Europe members Viktor Hovland and Paul Casey finished on the same score as Poulter, while Sam Burns and Sergio Garcia are two shots further back on 9-under-par heading into the weekend.

NEXT PAGE: SKY SPORTS BROADCASTER SAYS WE WILL SEE ANOTHER PLAYER DOMINATE LIKE TIGER WOODS