"I'd be lying if I said it wasn't anything to do with what Bryson did at the US Open." 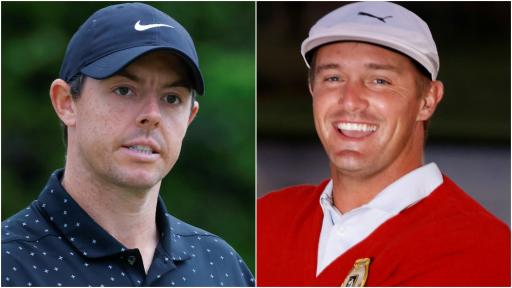 Rory McIlroy believes the recent speed training he has been doing in a bid to emulate Bryson DeChambeau has been contributing to his recent struggles on the PGA Tour.

McIlroy discussed his swing issues with the media after missing the cut at The Players Championship at TPC Sawgrass following dismal rounds of 79 and 75 to finish the week tied 142nd on 10-over par.

"I'd be lying if I said it wasn't anything to do with what Bryson did at the U.S. Open."

Rory McIlroy discusses his quest for more speed and the swing issues he's been struggling with as a result. pic.twitter.com/mFWJmuaZDT

"The swing issues all stem from probably October last year doing a bit of speed training and sort of got sucked into that stuff," said a frustrated McIlroy, who last week fell outside of the world's top 10 for the first time in three years.

"My swing got flat, long, too rotational. Obviously I added some speed and am hitting the ball longer, but what that did to my swing as a whole probably wasn't a good thing, so I'm sort of fighting to get back out of that."

Quizzed as to why he decided to go down that route, attempting to catch up with DeChambeau's impressive 150 mph clubhead speed, and McIlroy admitted he was simply following the crowd after the American's six-stroke romp at the US Open in September.

"I think a lot of people did [speed training]," said McIlroy.

"I'd be lying if I said it wasn't anything to do with what Bryson did at the US Open. I think a lot of people saw that, and were like 'woah'.

"If this is the way they are going to set up golf courses in the future, it helps, it really helps.

"The one thing people don't appreciate is just how good Bryson is out of the rough. Not only because of how upright he is, but because his short irons are longer than standard, so he can get a bit more speed through the rough than other guys.

"I thought being able to get some more speed is a good thing, but to the detriment a little bit of my swing I got there. I just need to maybe rein it back a little bit."

NEXT PAGE: LEE WESTWOOD LEADS THE PLAYERS AFTER 36 HOLES