Rory McIlroy's consistency in 2022 continued on Friday at Muirfield Village as he finished three shots behind Cameron Smith despite a late bogey. 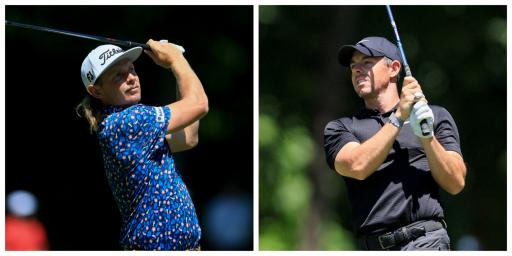 Rory McIlroy has given himself another opportunity to lift his 21st PGA Tour title as a 69 on day two of the Memorial Tournament put him just three shots behind Cameron Smith.

The Northern Irishman made three consecutive top-10s heading into this week at Muirfield Village and he is set to challenge once more on just his ninth start of the season.

This is only the second time in 10 career starts at the Memorial Tournament that McIlroy has been inside the top-10 after 36 holes. His other one came in 2011 when he was tied second.

"Another solid day's play. A couple of silly bogeys. Bogeyed the 11th par-5 and the 14th for the second day in a row. But I guess it sort of happens around here. It's getting tricky and you're going to make bogeys regardless of where they come," McIlroy said.

"Overall, two solid rounds of golf, right in contention going into the weekend, depending what guys do this afternoon. Yeah, happy with how everything is sort of going.

Related: Have PXG and Patrick Reed parted ways already on the PGA Tour?

New solo leader at 8-under. pic.twitter.com/WFDaLaeED0

"I'd love to win here. I won at Bay Hill at Arnold's place, but I was never able to get that handshake because Arnold passed away a couple of years before.

"It makes it extra special when you're able to win a tournament, whether it's hosted by Jack or Arnold or any of the greats in the game."

The 33-year-old began his second round on the 10th hole and he made two bogeys and three birdies on his opening nine. He added another birdie on the 3rd hole and an eagle on the par-5 5th hole.

His round of 3-under-par lifted him to 5-under-par for the week and in arm's length of Cameron Smith who also shot a 69 on Friday.

Smith is aiming to become the first player since Tiger Woods to win The Players Championship and the Memorial Tournament in the same season.

The highlight of Smith's round came on the par-3 12th hole where he expertly chipped in from the thick rough next to the green. This was one of four birdies on the day.

The five-time PGA Tour winner leads by one shot from Denny McCarthy and K. H. Lee. Earlier in the season, Lee successfully defended his title at the AT&T Byron Nelson.

The impressive and improving American duo of Cameron Young and Davis Riley are two shots behind after both players shot a 71 on Friday.

Next Page: Hideki Matsuyama disqualified from Memorial after marks on his 3-wood