Hideki Matsuyama has been disqualified from the Memorial Tournament for markings on the face of his fairway wood. 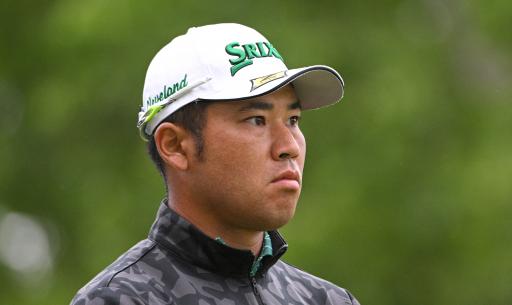 Hideki Matsuyama was disqualified from the Memorial Tournament during the first round at Muirfield Village all because of markings on the face of his TaylorMade fairway wood.

It marks the first DQ of Matsuyama's career.

Here is a closer look at why he was disqualified, with PGA Tour chief referee Steve Rintoul giving the official reasons to Golf Channel's Todd Lewis below:

"Unfortunately our committee learned right after Hideki teed off that he might be carrying a club that would be non-conforming," said Rintoul.

"The pictures you can see on TV (see above), a substance has been applied to the face by a gentleman that works on one of Hideki's clubs, the white paint you see on the face.

"Rule 4.1a within the equipment rules speaks to applying substance to a face that could unduly affect the performance of a ball, the flight, the spin.

"Those markings were placed there by his club guy to help with alignment.

"Assistance with alignment by placing a small Sharpie mark on the face is certainly allowed, but what was done there with that substance which is very much like a white out substance we would use at home, it was a coding that was not only in the grooves but was very thick along the face so he has applied a substance to the face which renders the club as non-conforming.

Hideki Matsuyama has been disqualified from @MemorialGolf for a non-conforming club (rule 4.1a). pic.twitter.com/7Z1HHH0LwG

"So unfortunately we tried to get to Hideki early on when we first heard about this. We had one of our officials talk to Hideki on the 2nd hole. He was asked if he used the club, and the answer was unfortunately yes as he used it off the 1st tee. So that meant a disqualification.

"I'd be lying standing here and say these equipment rules can sometimes be very finicky and difficult, so our committee did our due diligence with the equipment standards guys from the USGA.

"We just made sure we were not missing anything here and that nothing was on his club that would be okay for Hideki, but I met him on the 5th fairway and I spoke to the gentleman who applied the substance to the face of the club, and even though it was done for alignment purposes, it was excessive, it was a large amount of paint on the face and that could affect the performance of the ball.

"If the paint had just been down in the bottom of the grooves it would have been okay, but because it was actually physically on the face of the club, that really became the problem for Hideki."

Matsuyama, who won his first of eight PGA Tour titles at the 2014 Memorial Tournament, nearly made eagle on his 1st hole when clattering the flagstick with his approach shot but he would go on to par the hole.

He then followed that up with a double-bogey six at the par-4 2nd and he then added a bogey at the par-4 6th.

Matsuyama was playing in the same group as Rory McIlroy and Patrick Reed, the latter who has caused his own form of controversy today by ditching his PXG cap.

Next Page: Have PXG and Patrick Reed parted ways after just six months together?