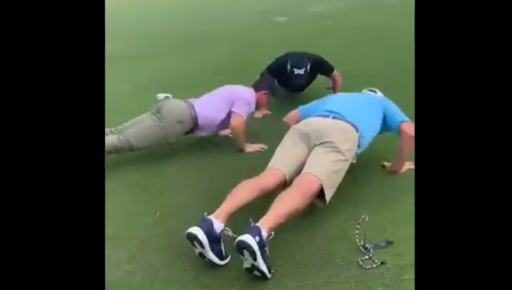 Rory McIlroy would love nothing more than to push up back to the top of the world rankings in 2021, and push ups were certainly the order of the day when the Northern Irishman bumped into Hall of Famer Gary Player on the range on Wednesday.

McIlroy and his putting coach Brad Faxon met up with Player on the range at The Bear's Club, and in true Mr Player fashion, fitness was at the front of proceedings. Just remember, Mr Player is 85 years old! WATCH the hilarious video below:

At the Bears Club yesterday and this happened... A combined 13 majors and 60 push-ups. But one Hall of Famer @garyplayer is 85 and the other @McIlroyRory is 31. One of us looks like he could have done 100... pic.twitter.com/wKeI8QMjtP

Social media was quick to react to the video.

Here's a look at what golf fans have been saying on Twitter:

Indeed. He should have mentioned it in an interview so we would’ve known!

This man is amazing! 85 years old. Fair play to him.

Love Gary, but those can hardly be considered push ups.

McIlroy is currently ranked seventh in the world and has not played in a competitive tournament since finishing tied fifth at The Masters behind Dustin Johnson.

The former World No.1 is expected to tee up at the Abu Dhabi HSBC Championship on the European Tour from January 21 to 24. Justin Thomas is also expected to be in the field.

The BEST Nike Golf shoes to freshen up your game in 2022
KRUX looks to bridge the gap between course and casual golf wear
Rory McIlroy
nike golf
picks of the week
Gary Player
PGA tour
Previous
Golfer adds his name to the record books by making a CONDOR!
Next
PGA Tour players stat comparison: Tiger Woods vs Bryson DeChambeau