Nelly Korda has kept up her scintillating form on the LPGA Tour by setting the early pace at the AIG Women's Open. 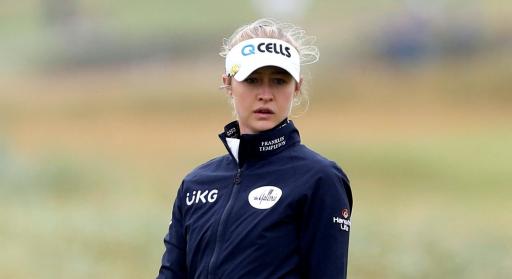 Nelly Korda has made a fast start to her campaign at the AIG Women's Open, carding a superb score of 67 to hit the top of the leaderboard in the first round.

The 23-year-old, who won the Olympic gold medal in Japan earlier this month, is the hot favourite to pick up her second major title and she started the day with three birdies and a bogey in her first six holes.

The young American added another birdie at the 9th hole to make the turn on 3-under-par. Although she bogeyed the 12th and 16th holes, she made four more birdies on the back nine to post 5-under-par at Carnoustie.

The world number one is right in the mix ⛳

Nelly Korda with a great approach to the 17th #AIGWO #WorldClass pic.twitter.com/S82IUJGZET

Korda became the new World No. 1 after she won her first major title at the Women’s PGA Championship at the Atlanta Athletic Club at the end of June.

Her performance at the Kasumigaseki Country Club at the Olympics was typical of her current form on the LPGA Tour. Before picking up her first major title, she won the Meijer LPGA Classic for Simply Give.

She has been joined on 5-under-par by the Swede Madelene Sagstrom who made seven birdies and two bogeys in her first round in Scotland.

Two-time major winner Lydia Ko had a solid start to her Open campaign on Thursday, carding a level-par 72 to sit five shots behind Korda and Sagstrom.

The World No. 6 made three birdies and three bogeys on her opening nine holes, before parring every hole on the back nine to complete her round.

NEXT PAGE: THIS IS WHY IAN POULTER WILL 100% BE AT THE RYDER CUP THIS YEAR