Rory McIlroy has seriously questioned the commitment and effort of players playing in the Saudi-backed golf league when they have "guaranteed money." 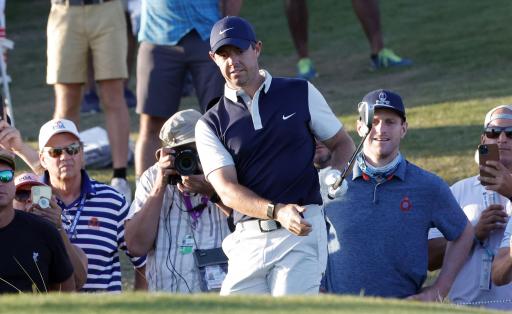 Rory McIlroy has seriously questioned the "competitive integrity" and the motivation of the players that could join the Saudi-backed golf league.

Speaking about the new developments in the Middle East, McIlroy explained his own experiences of receiving appearance fees and how it has affected his tournament mindset.

The International Series, a 10-event circuit backed by LIV Golf Investments and the Public Investment Fund, was announced last week and each event will be part of the Asian Tour.

LIV Golf Investments, of which Greg Norman is the CEO, have pumped $300 million into the Asian Tour, an investment that has been met with hostility and accusations of 'sportswashing' on behalf of the Saudi Arabian government.

RELATED: TIGER WOODS "LOOKS HUGE" IN FIRST PUBLIC SIGHTING IN OVER A MONTH

"It's the competitive integrity to me that's one of the biggest issues here, right," McIlroy said.

"It's like, how hard are guys going to compete when they know that they are guaranteed whatever the money is.

"Even when I started to get appearance fees back in 2009 or whatever, I struggled with that, going to tournaments in Korea and Japan feeling like I had already won before I teed it up. I had to get over that mental battle of that."

Huge sums of money have reportedly been offered to players on the PGA Tour to defer to the International Series. Bryson DeChambeau was supposedly offered over £100 million to be the face of the Asian Tour.

Ian Poulter was also allegedly offered £22 million to move over to the Saudi-backed series and Phil Mickelson revealed that a lot of players in the top 100 of the world rankings have been approached.

This is where McIlroy's claim of "guaranteed money" is relevant. The four-time major winner has previously labelled the Saudi-backed developments as a money grab and compared it to uprisings in European football.

"You go back to what happened in Europe with the European Super League in football," McIlroy said in 2021.

"People can see it for what it is, a money grab, which is fine if what you’re playing golf for is to make as much money as possible. Totally fine, then go and do that if that’s what makes you happy.

"I’m just speaking about my own beliefs. I’m playing this game to try to cement my place in history and my legacy and to win major championships and win the biggest tournaments in the world.

NEXT PAGE: TIGER WOODS WILL RETURN AT GENESIS INVITATIONAL ON PGA TOUR NEXT WEEK