Viktor Hovland talked about his recent victories, the pressure he feels down the stretch before winning and rival golf leagues. 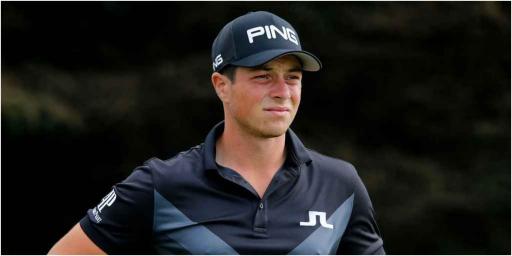 Speaking ahead of the WM Phoenix Open, Hovland admitted that he was a little bit green the last time he played this tournament.

He arrives here in a rich vein of form but suggests he is not going to get too caught up in the moment, he just wants to get better.

Tiger Woods has spoken before about the process of learning how to win and in recent times Hovland has taken his opportunities.

When asked about how his emotions compare now to when he first came out on tour as a young Norwegian with a big reputation, he said:

"Yeah, I would say obviously I have gotten better at it because I have won more. But it's a unique feeling every single time, because, I mean, it's the same adrenaline, same pressure that you feel. You know, just going back 15 years ago, if I was playing a junior match against a buddy and we had 10 bucks on the line or whatever, just playing a random tournament, you still feel, it's the same pressure that you feel.

"But I think just kind of the more times I have put myself in that position and I have seen myself do well under those circumstances, you kind of just -- you get a bit more comfortable every single time, but it's still pretty stressful every single time you're in there, because time slows down.

These past few weeks the golf world has been gripped by talks of rival golf leagues, particularly the venture Greg Norman is the figurehead of.

Hovland refused to be drawn into this at his press conference, suggesting that the subject is hard to talk about in detail.

"I haven't talked too much about that stuff with other players. It's been some, but I think just right now there is so much unknown, and that's kind of -- you know, yeah, you can talk about it, but then if we don't know too much either, it's hard to talk about too much.

"So, you know, we are kind of still trying to figure this stuff out. I certainly love playing on the PGA Tour and it's good to be back here after a little trip over on the DP World Tour.

"But, you know, I'm playing a bunch of PGA Tour events coming up, and we'll kind of see what happens after that. I don't really know what's going to happen. But I'm just focusing on this event and next week and after that."

More: Matt Fitzpatrick gets an ace...in a practice round

Charles Howell III is making his 600th PGA Tour start in Phoenix. Hovland has been described as a "little brother" to him in the past.

"It was just kind of, because obviously I didn't really know Charles that well before kind of my -- I played Mayakoba, that was my first TOUR event, but I was still an amateur, and like it's a big change going from college golf to the PGA TOUR, and I didn't know him that well but he kind of welcomed me with open arms. Especially that first year when I was playing on exemptions, I didn't really know anyone.

"I was still kind of getting to know Shay Knight, my caddy. We are good friends now, but everything is just brand new, and I really appreciate him and his family. I was basically their third child there for a good year. We were going to escape rooms and doing all fun stuff.

"So it was more, you know, just kind of being with people that are great and want to help you. Not so much, Okay, this is where you need to hit it. This is how you need to think.

The famous 16th hole in front of a raucous crowd was also a topic of conversation. Hovland is a fan of the hole, yet he hopes that it doesn't get boring.

"Yeah, no, it's an event like no other. I wouldn't really say it's a good thing if everyone tries to create kind of what the 16th hole is here. I think it's better if -- I think they are already doing that with each event kind of making it their own, kind of putting some uniqueness to each event. I think that's a better recipe than just trying to, Okay, let's create 16th at Waste Management.

"I think it is cool, you have places like 17th at Sawgrass. It's loud, it's a sick hole, frankly. But it's unique in its own way.

"I think we need more of that, but at the same time it doesn't need to go overboard where, you know, if we get to a point where 16th out here gets boring, I don't think that's good either."