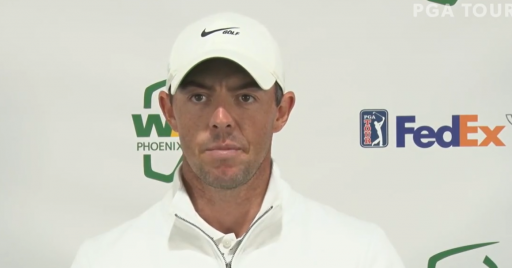 Rory McIlroy has hit back at golf's governing bodies, the R&A and USGA, by claiming their latest attempts to combat driving distance on the PGA Tour and European Tour is a "huge waste of time and money."

McIlroy, speaking to the media ahead of this week's Phoenx Open at TPC Scottsdale where he plays for the first time in his career, was all set to walk out of his press conference as he said: "I can't believe nobody asked me an equipment question... I'd be here all day for that!" His request was soon met with delight among the golf media, as you can imagine.

WATCH RORY SLAM THE R&A AND USGA IN THE VIDEO BELOW - SKIP TO 22 MINS TO WATCH HIS COMMENTS:

"I think the authorities, the R&A and USGA, are looking at the game of golf through such a tiny little lens," said McIlroy.

"What they’re trying to do is change something that pertains to 0.1% of the golfing community: 99.9% of the people this play this game play for enjoyment, for entertainment. They don’t need to be told what ball or clubs to use.

WATCH: RORY MCILROY REVEALS A VOLUNTEER STEPPED ON HIS BALL AT TORREY PINES

"We have to make the game as easy and approachable as possible for the majority of golfers. So honestly, I think this distance insight report has been a huge waste of time and a huge waste of money, because that money that it’s cost to do this report could have been way better distributed to getting people into the game, introducing young kids to the game, introducing minorities to the game.

"I heard [USGA executive director] Mike Davis say something about trying to protect the game for the next 100 years. This isn’t how you do it. This is so small and inconsequential compared to the other things happening in the game. It’s the grassroots. It’s getting more people engaged in golf. That’s where they should be spending their money, not spending it on the distance insight report."

McIlroy, did however, admit that he is all for golf's governing bodies bringing more skill into the professional game.

"If they want to try to make the game more difficult for us or try to incorporate more skill to the game, I would be all for that because I think it only benefits the better player, which I feel like I am.

"I think maybe they said that in terms of local rules and maybe some sort of bifurcation but we we are such a tiny portion of golf.

"Golf is way bigger than the professional game. We’re such a tiny part of it. It’s the other stuff that really matters and that’s the stuff they need to concentrate on."