Paige Spiranac believes that Patrick Reed, Brooks Koepka and Bryson DeChambeau are "good for golf" despite the negative opinion some fans have on the three PGA Tour stars. 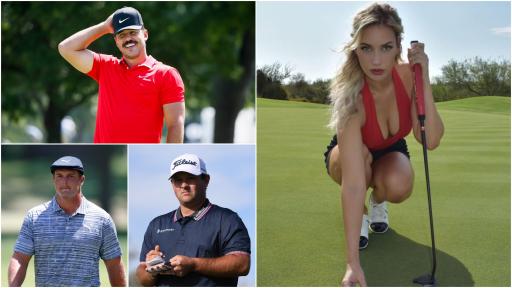 Paige Spiranac has defended three of the PGA Tour's most controversial players in Patrick Reed, Brooks Koepka and Bryson DeChambeau, stating that they are good for golf, despite the negative opinion some golf fans have of them.

The Instagram sensation shared her opinion on Sunday as Reed captured his ninth PGA Tour title at the Farmers Insurance Open, after he was surrounded in controversy yet again for his actions during the third round.

Reed's name was trending on Twitter after he picked up his ball and took relief without speaking to a rules official first, with video evidence showing his ball bounced before finishing in the rough.

After remaining "resilient" to pull through and claim a five-shot victory, the largest margain of his career, Paige tweeted about Reed, saying that the American makes for some "entertaining" golf.

Paige then went on to add that in her opinion, Reed and two other of the PGA Tour's biggest stars, are all good for golf: "Give me Bryson, Reed, and Brooks sh*t talking all day long. Hate them or love them, it’s good for golf."

Give me Bryson, Reed, and Brooks shit talking all day long. Hate them or love them, it’s good for golf

DeChambeau is often criticised for being a little different in his way of thinking and his slow-play antics have caused him to be slammed by golf fans in the past, but now the attention has switched to his "grip it and rip it" style off the tee.

Koepka on the otherhand is slightly less controversial, but his say it how it is attitude doesn't sit well with some golf fans.

Speaking on her podcast 'Playing A Round', Paige went into further detail on her take of the Reed incident at the Farmers Insurance Open.

“He shouldn’t have picked the ball. That’s where he went wrong and that’s the only mistake that he made,” she said.

“You can tell if it’s embedded or if it’s not embedded. And I think that’s why he picked it up, because I think he saw maybe it was a really bad lie.

“Or maybe he didn’t, but again, because of everything that’s happened in the past, you automatically think he’s cheating, he’s trying to take advantage of the situation.”

NEXT PAGE: Rory McIlroy: "The PGA Tour now tells me a volunteer STEPPED ON MY BALL!"