Team TaylorMade superstars Rory McIlroy and Tommy Fleetwood took part in a challenge to see who could hit the ball closest to the pin by skipping it across a lake. 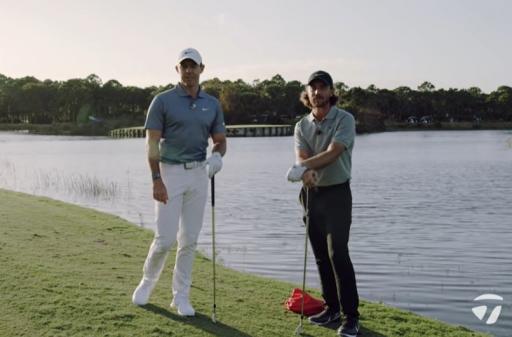 Rory McIlroy and Tommy Fleetwood had a little bit of practice for the iconic Augusta National water skip, after the two TaylorMade stars took part in a water skipping challenge to see who could get their ball closest to the pin.

The challenge didn't take place at Augusta, but the shot was very similar to the one we watch all the players attempt during their practice rounds for The Masters.

McIlroy and Fleetwood were given a bag of balls and were tasked with skipping them across the lake, into a ramp on the edge of the green to pop the ball in the air and then finally on the green.

Which player managed to skip their ball closest to the flag? Watch the video from TaylorMade to find out...

WATCH MCILROY AND FLEETWOOD TAKE ON THE WATER SKIP CHALLENGE:

It seemed to take both players quite a while to get the technique right, but towards the end of the video they were making it look pretty easy.

McIlroy was the winner with his effort that finished 4 feet 4 inches from the hole, but it will the challenge of The Masters he hopes to win this week as he searches for the one major he is yet to claim.

The Northern Irishman arrives at Augusta in rather poor form, having missed the cut during his defence of The Players Championship before he was knocked out of the WGC-Dell Technologies Match Play in the group stage, but without the pressure and expectation for McIlroy to win The Masters, it may just help him as he looks for his first green jacket.