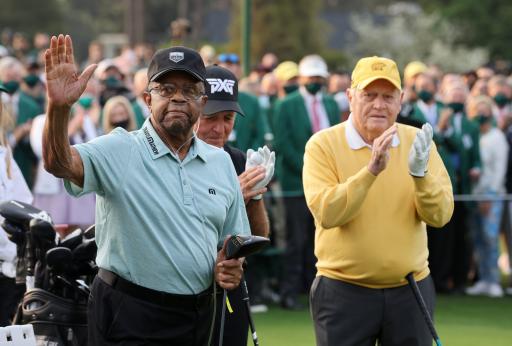 Jack Nicklaus and Gary Player were joined by Lee Elder, the first black man to play in The Masters, as honorary starters at Augusta National today. Only Elder's big moment on the 1st tee was somewhat ruined by Player's caddie and son who was seemingly trying to sneak in a free ad for golf balls made by OnCore.

Elder, 86, joined record 18-time major champion Jack Nicklaus, 81, and nine-time major winner Gary Player, 85, as honorary starters for the 85th Masters, in recognition of him being the first black man to play in The Masters back in 1975.

Two scholarships in Elder's name will be awarded annually to a player who competes on the men's golf team at Paine College, a historically Black college and university in Augusta, and one to a player on the new women's team, funded by the golf club.

But as Fred Ridley, chairman of Augusta National Golf Club, was giving his speech about Elder's life and work in golf at large, Player's caddie decided to use the moment to advertise some golf balls.

A number of golf fans and golf media could not believe what they were witnessing.

The caddie is apparently Wayne Player, Gary’s son. He’s previously been arrested for fraud and charged with battery in incidents relating to renting a house at the Masters and selling Masters tickets. How was he even allowed in?!

A couple people have pointed it out (as I didn't catch it in the moment) but Gary Player's caddie (I'm sure he was not acting on his own) using Lee Elder's moment to try and sell golf balls was ... really bad.

Lee Elder’s moment...yet Gary Player and his caddie hijack it to sneak in a free ad for golf balls? Stinks bigtime pic.twitter.com/nN9xPoRF8E

A great golfer, celebrated at a great tradition.

Less could be said for Gary Player’s caddie trying to flog golf balls in the background https://t.co/1zm0SyPt3F

Anyone else notice the shameless use of Lee Elder's moment by Gary Player's caddie to advertise golf balls?

Gary Player and his caddie with the bad look today. Who knew Gary had such bad judgement on what’s proper. I guess there is no shame on selling golf balls. https://t.co/zcXPtAxaxy

Your son was a disgrace during that ceremony, Gary. From someone who is a big fan of yours that was sad to see.

Why was your son promoting golf balls during the entire ceremony. Bad look Gary

OnCore's CEO have since released a statement distancing the company from the controversy.

"We are aware of the criticisms that have been raised as a result of our product being displayed by Wayne Player at this morning's ceremonial tee shot at the Masters, most specifically during the introduction of Lee Elder, one of golf's trailblazers," wrote Keith Blakely.

"We did not ask or instruct Mr Player to have our ball sleeve visible during the ceremony and are sorry if his actions caused any offense or was a distraction from the wonderful recognition being paid to Mr Elder."

After learning of his invite last November, Elder said: "The opportunity to earn an invitation to the Masters and stand at that first tee was my dream and to have it come true in 1975 remains one of the greatest highlights of my career and life.

"So to be invited back to the first tee one more time to join Jack and Gary for next year's Masters means the world to me."

What did you make of the actions of Player's caddie during Elder's big moment? Share your thoughts and comments on our social media channels, or come and join us on YouTube.

PGA Tour
EA Sports set to make comeback with PGA Tour game featuring all four majors
The Masters
Tom Watson joins Nicklaus and Player at The Masters as honorary starter
The Masters
Bryson DeChambeau DELIGHTED to receive official Masters invitation
The Masters
The Masters: Reigning champion Hideki Matsuyama to receive his official invite
The Masters
See who snuck inside the world's top 50 to earn their spots at the 2022 Masters