McIlroy shot a 6-under par opening round to take a share of the lead alongside Corey Conners. 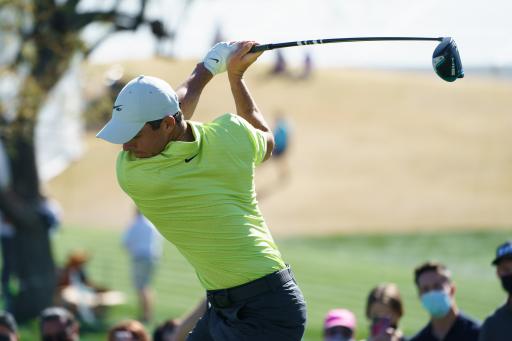 Rory McIlroy revealed he took inspiration from Tiger Woods during the opening round of the Arnold Palmer Invitational at Bay Hill, where he shot 6-under par to take a share of the lead.

It was a stunning performance from McIlroy, who used his power to his advantage on a day where the longer hitters were able to attack the course, with McIlroy making five birdies in a row on the back nine.

Woods has won the Arnold Palmer Invitational an astonishing eight times and McIlroy said he paid close attention to the way in which the 15-time major winner carried himself at Bay Hill over the years.

"I feel like you don't have to do anything special to shoot a good score here," said McIlroy. "You can be really conservative off the tees if you want to be, so there are a bunch of irons that you can hit off tees. I think the toughest thing about this course is the par-threes and I played them in three under today, so that was a bonus.

"But I've watched Tiger enough here over the years and the way he played this course was, he played it very conservatively, he took care of the par-fives, and that was usually good enough to get the job done. So I've taken a little bit of a leaf out of his book.

"The first few holes were a little slow going and I made a really good birdie on 14 and that sort of got me, got the round going. The two twos on the back nine were great. Coming off last week where I really struggled on the par-threes, so it was quite a turnaround.

"But I played well after that and hit some really good shots, some good drives, I saw a lot of really positive signs out there today, which is really encouraging.

"I've always felt comfortable here. I think I saw a stat the other day that this course, more than any other on the PGA Tour, the correlation between strokes gained off the tee and performance at this course is higher than anywhere else. And obviously myself and Bryson are No 1 and 2 in strokes gained off the tee, and we both shot two good scores today.

"It's one of these places where you can give yourself an advantage by taking driver and getting it up there, tee shots like three and six, where some of the shorter guys are having to go up the sliver of fairway up the right when longer guys don't have to really worry about that."