Justin Rose is currently projected 126th in the FedEx Cup standings as he sits five shots behind Russell Henley with one round remaining in North Carolina. 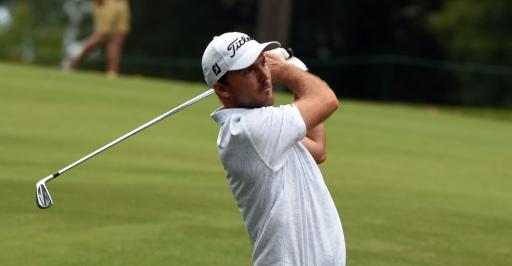 Russell Henley will take a three-shot lead into the final round of the Wyndham Championship, as the American carded a 1-under-par 69 on Saturday.

Henley held a commanding four-shot lead after his superb performances in the first two rounds, and a birdie on the 5th hole and an eagle at the par-5 15th hole helped him build on his advantage yesterday.

The 32-year-old has had a great season in 2021, finishing in the top 25 on eight occasions and in the top 10 on four occasions. With his third-round 69, he is three shots ahead of Tyler McCumber in second place on 15-under-par.

Henley, who last won on the PGA Tour at the Shell Houston Open in 2017, is safely ranked 23rd in the FedEx Cup standings, so he will almost certainly be playing at the Northern Trust Open next week in the 125-man cut.

Russell Henley eagles 15 to get his lead back to 4 @WyndhamChamp . pic.twitter.com/Il3SU62TQW

South African Branden Grace and Kevin Kisner are four shots behind on 11-under-par, as both players respectively shot 64 and 66 in the third round

Justin Rose equalled Henley's score of 1-under-par on day three to move to 10-under-par for the tournament, which puts him in contention at Sedgefield Country Club, but in a precarious position in the FedEx Cup standings.

The Englishman won the FedExCup in 2018, but he is currently 126th in the standings and must maintain his challenge on Sunday if he is to qualify for next week.

Olympic silver medallist Rory Sabbatini is four shots behind Henley on 11-under-par, but he currently sits 122nd in the FedEx Cup rankings, which means he would sneak into the first stage of the playoffs.

Veteran PGA Tour star Matt Kuchar is also right on the bubble in 124th place. The 43-year-old is nine shots behind Henley on 6-under-par, as he carded a 1-over-par 71 on Saturday.

Due to the expectation of inclement weather later in the day, the tee times have been brought forwards between 7 am and 9 am local time in North Carolina.