This golfer could have had a painful bruise on another day... 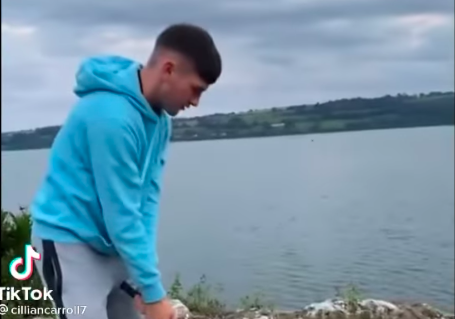 There have been many golfers over the years who have attempted to hit their ball across water and skim it across the surface.

Some players have mastered the art, such as World No. 1 Jon Rahm who sent his ball across the water on the 16th hole at The Masters and managed to make a hole-in-one.

DEBATE: MATT WALLACE LAUNCHES HIS CLUB INTO THE TURF AGAIN - IS IT TIME TO DOCK SHOTS FOR PLAYER STROPS?

It is an extremely tough task as you need to hit the ball in a certain way for it to skip across the surface. For one golfer, things almost took a turn for the worse when attempting the difficult shot.

The man took his stance in a very scenic spot by a lake, he swung back with what looks like a three-wood and the ball did not travel far at all.

The ball immediately hit a rock and bounced straight back towards the golfer, who flinched as the ball luckily flew past him. We are not sure if the ball hit the cameraman or if it hurt them, but it is likely that the ball hit them.

Although the player was taking on a very hard shot, no one could have expected what was to happen next. We can only hope that no one was hurt in the process.

"Could have been nasty?" one fan said.

"I don’t really get this trend!" one fan commented.

"I just watched this five times trying to see where it bounced off," another fan said.

"How did that even happen," one fan said.