Sam Burns endured a nightmare on the 14th hole as he fell out of the lead at the Hero World Challenge. 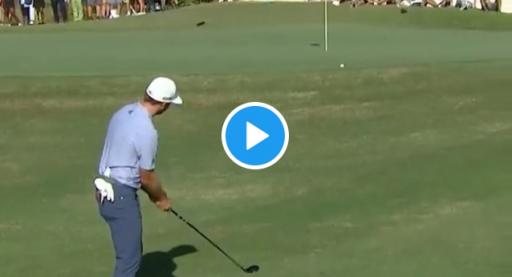 Sam Burns fell out of the lead in dramatic fashion on the 14th hole at the Hero World Challenge as he took five chips en route to a triple-bogey seven.

Burns had raced to the top of the leaderboard when playing his first 13 holes in 3-under par, but he handed all those shots back on the short par-4 14th.

The false front claims another one.

A triple bogey for Sam Burns drops him out of the lead. pic.twitter.com/qIISEfGl3U

Burns, 25, saw his eagle chip fall off the other side of the green, leaving him a tricky uphill shot over a false front.

That is sadly where things got really sticky for him.

Out came the fairway wood for a low bump-and-run shot, but unfortunately his ball would not make the green.

Using the same club, Burns then had another go and while his ball reached the green, it fell all the way back down the slope to his feet.

Burns remained faithful with the fairway wood, but once again his ball never got up to the green and back it came.

Clearly fed up of using the 3-wood, Burns this time used a wedge and he was very fortunate for his ball to stick on the fringe.

To his credit, he drained the 15-footer for a triple-bogey seven, but moved from the lead to three shots behind.

Burns recovered with an eagle on the par-5 15th and then added another birdie at the par-3 17th, but ultimately his triple at 14 would cost him dearly.

He carded a 3-under 69 to finish 15-under par, but three shots behind eventual winner Viktor Hovland.