Yet more encouraging signs for Tiger Woods fans as the 15-time major champion rips balls on the range. 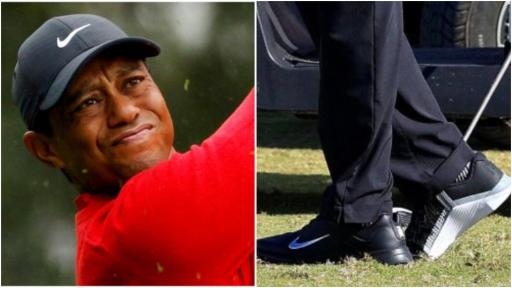 There were yet more signs of progress and encouragement for Tiger Woods at the Hero World Challenge on the weekend as the 15-time major champion belted balls on the range.

Woods was seen thrashing away at a number of balls during the week at Albany in the Bahamas, and his good pal Bryson DeChambeau also came to join him on Saturday.

Tiger and Bryson had a little closest-to-the-pin challenge. Rumor has it that the may have gotten the better of the world no. 7.

He was then seen in his famous final-day red, once again hitting drives, fairway woods, irons and wedge shots. He also spent a bit of time on the practice green.

There has been a strong rumour that Woods and his 12-year-old son Charlie Woods will compete in the upcoming PNC Championship from December 18 to 19 - but there have been no confirmed reports as of yet.

Woods was also rather interestingly seen taking off his right Nike Golf shoe and replacing it for his Nike running shoe.

Interesting pic here I noticed - wasn’t this way for the entire range session in other pics but looks like at one point he took his golf shoe off the injured right foot and put on his running shoe. pic.twitter.com/ArRwuSRTY8

One golf fan said: "There’s obvs medical reasons for this but if hitting wedge shots this may be to try and mimic feels he had while practicing at home. Many teachers encourage ppl to practice touch shots barefoot to feel that connection of weight transfer w/the ground."

Check out more shots of Woods in action on Sunday, courtesy of the popular TWLegion account on Twitter:

Here’s a vid we were sent of TW leaving 18 green and walking up the stairs. Moving well all things considered after hitting balls this afternoon. pic.twitter.com/OUGRAUocnW

Another tough day for the haters and doubters.
-
(: Mike Ehrmann / Getty Images) pic.twitter.com/wDGYmNpzfI

Tiger talks about the state of his game right now pic.twitter.com/TCzLWdGVT7