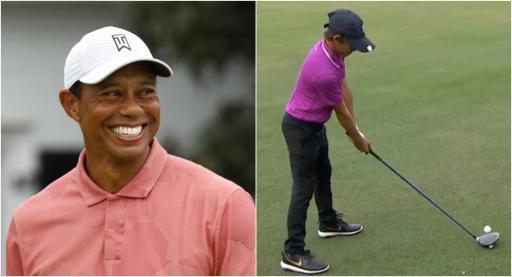 Will Tiger Woods play in the PNC Championship with his son Charlie Woods from December 18 to 19? That is the question on everyone's lips right now, especially after seeing the golf legend smashing balls on the range at the Hero World Challenge last week.

There has been strong rumours the past few days that Woods will indeed tee it up with son Charlie in the father-son golf event, just as they did 12 months ago.

Woods will be able to ride in a golf cart as well, just to add even more speculation that this could be a perfect fit for Woods to return to competition for the first time since his horror car crash in February.

So will he actually play?

Well, Woods was posed the question by Steve Sands and David Feherty in the commentary box on Saturday evening, and this is what the former World No.1 had to say:

"Playing Tour golf and being prepared to play and try shoot low scores against the best players on the toughest golf courses, that's a totally different deal," said Woods.

"I am a long, long way from that, and so don't expect me to be out on Tour for quite some time."

Sands then said to Woods, "I'm not sure if you noticed the PNC Championship is kind of a hit and giggle, and you can ride a golf cart and it's a very short golf course."

Woods replied: "It's short for Charlie... it's not short from where I'm playing from!

"I'm playing back there with Justin [Thomas] and I hit it half as far as he does."

Woods responded: "He carried me, no doubt about it."

So as it stands there is no definite answer... but Woods has clearly left the door ajar for a possible return in two weeks' time.

He didn't rule it out when asked the question by Sands, so perhaps he is going to make a last-minute call this week.

Tournament directors have left a space for Woods Snr and Jnr in the field should they still wish to compete.

Notah Begay, a close friend of Woods' who works as a golf reporter for Golf Channel, last week claimed it was "very possible" that the 15-time major champion would tee it up with Charlie.

Brandel Chamblee admits he would be shocked if Woods does not decide to play in the two-day event.

For now, Woods has not committed to the tournament, but let's see what transpires over the coming days.

NEXT PAGE: TIGER WOODS WEARS RUNNING SHOE AS HE HITS BALLS ON THE RANGE AT HERO WORLD CHALLENGE