Scottie Scheffler is arriving at a major tournament as a major champion for the first time and he has been reminiscing about the final round of The Masters in April. 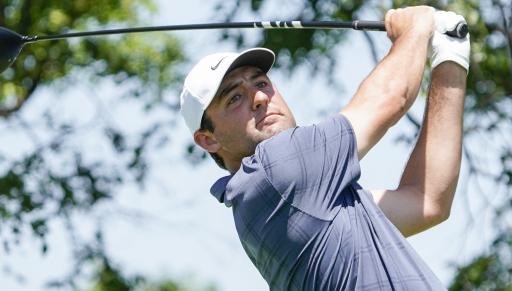 World No.1 Scottie Scheffler revealed the point when he knew he'd won The Masters and his first major championship.

Speaking to Sean Zak at GOLF, Scheffler admitted that after playing the par-5 15th hole at Augusta National, he could look forward to wearing the Green Jacket.

Cameron Smith, his closest pursuer in the final round, triple-bogeyed the 12th hole and after Scheffler made pars on 11 and 12 and birdied the 14th and 15th holes, the outcome became inevitable.

Despite a calamitous four-putt on the 72nd green, the 25-year-old sealed the deal by three shots from a rallying Rory McIlroy who shot a 64 in the last round.

"I would say probably after 15. Cameron (Smith) hit it in the water on 12. I made a really, really good par there. That was one of my best ups and downs of the day," Scheffler said.

Related: US PGA Betting Tips: Will it be Xander Schauffele's moment at Southern Hills?

"And then parred 13, birdied 14 and then 15 is a scary hole. There’s so much bad stuff that can happen there. The back nine (at Augusta National) is so special because you can play great and you can just completely implode.

"Yeah, tee back. I went for the green in two because the wedge shot is so hard. You’re hitting on a downslope, into the grain. If you get a bad lie, it’s hard to make really good contact.

"And after I hit the second shot over and I had another nice up and down, I had a five-shot lead and I was like, ‘Okay, now I really feel like it’s my tournament to win and all I got to do is close it out.’

"Made a good par at 16 and I was kind of relaxed like - I can make two doubles on 17 and 18, you know - I relaxed for a split second on 17 and hit a horrible golf shot. I was mad. Snap back into it, get back to playing. I made a great par, and I let myself enjoy it when we started walking up the 18th.

"And that’s why people say ‘Don’t get ahead of yourself. One shot at a time.’ All those cliches, they reign true, because I had one of those moments. ‘I accomplished it. I can get the ball in the hole in like six or seven shots.’"

It was Scheffler's fourth win in six events on the PGA Tour and he has solidified his place as World No.1 He has earned $10,299,587 so far this season.

He arrives at Southern Hills this week, one of his favourite golf courses by admission, as the favourite to win his second major title.

Next Page: How to live stream the PGA Championship for free online