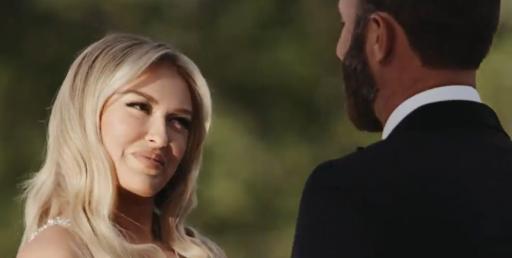 Paulina Gretzky and Dustin Johnson have taken to Instagram to share their incredible wedding video after recently tying the knot.

The couple officially said "I do" on Saturday 23 April in a ceremony at the luxurious Blackberry Farm resort surrounded by family and friends.

Just like we saw when Dustin slipped on the famous Green Jacket at The Masters in November 2020, the former World No.1 understandably got a little emotional during the wedding vows.

"Wow, such a beautiful video," read a comment from one of Paulina's followers.

Dustin Johnson is bidding to win his third major title at this week's US PGA Championship, an event he finished second to Brooks Koepka back in 2019.

Johnson has two majors to his name at the US Open and The Masters, meaning he is half way to completing the coveted career grand slam - something Jordan Spieth is looking to achieve at Southern Hills this week.

Dustin and Paulina share two children. Tatum is seven years old and River is four years old. They have been engaged since 2013.

Paulina is the daughter of the ice hockey legend Wayne Gretzky and it was his wife Janet who introduced their daughter to the golfer.

DJ and Paulina now reside in Florida. When asked about their long engagement, Paulina said: "I just did things my own way, I just didn't want to listen to how everyone else viewed things.

"I fell in love with someone so fast and we just had the best thing that's ever happened to us happen so quickly."

Next Page: Richard Bland says he will definitely be playing in the first LIV Golf event - "If I get banned, I get banned"