Jack Nicklaus watching a young Phil Mickelson at a golf clinic made him very, very nervous. 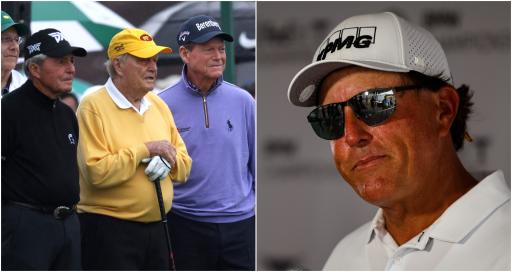 When it comes to golf clinics these days there are so many viral videos involving incredible players like Phil Mickelson doing the rounds.

His famed flop shot has been filmed so many times with willing (and slightly nervous) participants over the years.

We've seen gargantuan NBA players stand in front of Lefty, full of dread, before Mickelson loops one directly over their head.

It's an impressive shot, to say the least, and it's one of the many reasons why Mickelson has won 45 PGA Tour titles and six majors.

Mickelson, of course, has decided not to defend his title at the PGA Championship this week at Southern Hills.

There are many reasons why he has potentially decided against playing. His form? Greg Norman's comments? The heat of the media?

Only he knows. This week, the author who published his controversial comments that led to his exile in the first place is releasing his book.

Rumour has it that Mickelson is actually more concerned with another bombshell book written by Billy Walters.

Walters' memoir reportedly outlines his dealings with Mickelson that led to his conviction in 2017 for wire fraud.

Mickelson was caught up in that - and although he denied insider trading - he was forced to pay back nearly $1million dollars he had made.

In an extract from the book released this week, author Alan Shipnuck touches on Jack Nicklaus' first experience with a young Lefty at a golf clinic.

Other golf icons including Lee Trevino, Hale Irwin, Fred Couples and Arnold Palmer were there, so the story goes.

In an article published in The Times of London, Paul Azinger told Shipnuck: "The first time I saw him in action was a clinic at Grand Cypress, in Orlando. Phil had just turned pro. This had to be the greatest clinic ever: Nicklaus was there, Palmer, Trevino, Hale Irwin, Freddy [Couples]. Heavy hitters.

"During the clinic, Phil pulls a guy out of the crowd and has him stand right in front of him and then hits a full-swing flop shot right over his head. These days you see stuff like that on social media, but 30 years ago?

"It was like a bolt of lightning hit the driving range. The crowd was freaking out, everyone screaming.

"When the clinic was over and all the people had left, Jack and Arnold and Trevino—especially Trevino—gathered around Phil and said, ‘Son, don't ever do that again. You're gonna get yourself sued, you're gonna get the Tour sued.'

"He goes into this whole long spiel about the mechanics of the shot. I looked at Calc [Mark Calcavecchia] and said, 'This guy is gonna be goooood.'

"I mean, he's not even on Tour yet and he's giving Jack Freaking Nicklaus a full-blown lecture."