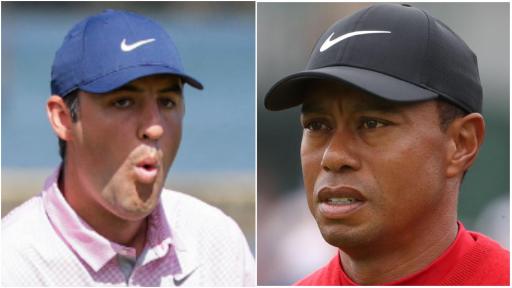 Scheffler, who has now won three times in his last five PGA Tour starts, has shattered the record for fewest days between a first PGA Tour title and reaching the World No.1 spot.

Woods won his first PGA Tour title at the 1996 Las Vegas Invitational and then 252 days later went on to become the World No.1.

But Scheffler achieved the feat in the space of just 42 days.

David Duval ranks third in the list at 532 days, with Jordan Spieth in fourth at 763 days.

The only thing is that Woods held the World No.1 ranking for 683 weeks in total - a record that will likely never be beaten during our lifetime.

Related: Scottie Scheffler says he tried to "show off" before he duffed chip at WGC Match Play

The Official World Golf Ranking system was introduced in 1986.

Scheffler, 25, becomes the 25th player to become a World No.1 and the ninth American.

He had gone 70 tournaments without a victory on the PGA Tour but that has all ended in recent weeks.

Scottie Scheffler has enjoyed his last 6 weeks on the PGA Tour pic.twitter.com/5CNOqfw7qK

Scheffler won the Phoenix Open in a playoff over Patrick Cantlay in February, shortly before winning the Arnold Palmer Invitational and WGC Match Play in March.

Since landing his maiden PGA Tour title at TPC Scottsdale 42 days ago, Scheffler has netted a cool $6.2 million.

Scheffler will now look to continue his red-hot form as he heads into the year's first major at The Masters in just over a week.