Chad Ramey has explained what was going through his mind as he claimed his first ever PGA Tour title as a rookie. 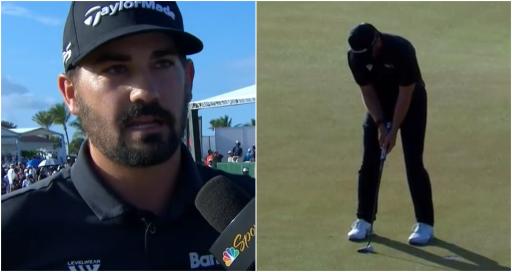 Rookie Chad Ramey says the nerves were "there all day" after he claimed his maiden PGA Tour title at the Corales Puntacana Championship.

The 29-year-old, from Mississippi, managed to find four consecutive birdies at his final six holes during Sunday's final round to snatch the victory at Corales Golf Course.

It gave him a closing 5-under 67 to take the title by one shot over Alex Smalley and an emotional Ben Martin with a 17-under total.

Martin missed a seven-foot putt at the last hole to force a playoff with Ramey. He was simply so overcome with emotion he could not speak.

At his interview with the media directly afterwards, Martin broke down in tears and asked for a few moments to gather himself before being consoled by his caidde.

After composing himself, he said: "That was obviously difficult. I've won out here before, won on the Korn Ferry, runner-up in the U.S. Am, but I guess maybe I wanted this one a lot more.

"I don't think I've ever been this emotional about golf, so this is a first, but I guess to me that's a good thing.

"Means I competed hard and it obviously stung. Hit two such good shots into 18 to have such a good opportunity and then not capitalize I guess is the most difficult part."

You can read more about Martin's story here.

But for Ramey, he started the day two strokes behind Martin who was trying to overcome a seven-year winless drought.

"I've always had the self-belief that I could get it done and I proved it today."@ChadRamey2 birdied four of his last six holes to earn his first career win @CoralesChamp. pic.twitter.com/rt6VyGXivK

He said: "I mean, yeah, it was honestly like I always thought it would be, it was very stressful, very nerve wracking coming down the stretch, but I just grinded it out, kind of stuck to my process, stayed within myself and pulled it out."

Ramey added: "The nerves were there all day, there's no doubt, but I knew I had a lot of holes left, a lot of birdiable holes left, so I just stuck to my game plan. Like you said, I got off to a slow start, but the putter kind of heated up there on the back and it all worked out."

PGA Tour pro Joel Dahmen claimed his first ever win at the same venue and like Ramey and Martin was also overcome with emotion.

There is something about that first win, man...