After losing to Sam Burns in a playoff at the Charles Schwab Challenge, Scottie Scheffler had to rush from Fort Worth to Quinlan in Texas to get to a wedding. 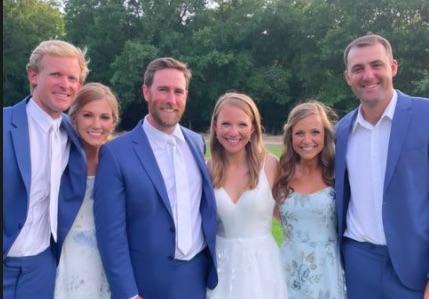 Scottie Scheffler probably wished he birdied the 72nd hole at the Charles Schwab Challenge because it would've saved rushing to his other commitment on Sunday.

Scheffler entered into a playoff with Sam Burns at Colonial Country Club and was beaten on the first hole when Burns slammed in a 38-foot putt from the back fringe.

The World No.1 then had to rush off to the wedding of his sister-in-law. Jim Nantz explained on the CBS broadcast that Scheffler had to drive 75 miles to Quinlan, Texas for the occasion.

His wife Texas wasn't in Fort Worth as she was already present at the wedding. Luckily, it appeared that Scheffler made it in time and had an enjoyable evening.

Related: Scottie Scheffler on Burns' playoff-winning putt: "He ruined all the fun"

Scottie Scheffler went straight from the playoff to his sister-in-law’s wedding. pic.twitter.com/GjRcMoSXVp

The 25-year-old posted some pictures on his Instagram story which showed he had enough time to arrive at the wedding, suited and booted.

Although he couldn't secure his fifth PGA Tour title at Colonial Country Club, another great performance on tour solidified his place at the top of the world rankings.

Scheffler has four wins and two runner-up finishes in 2022, an incredible count considering he arrived at the WM Phoenix Open in February without a win to his name.

As for Burns, he won his third tournament of the season and overturned a seven-shot deficit in the final round to reach 9-under-par.

The 25-year-old has now won four times in his PGA Tour career and he has reached his career-high mark of ninth in the world rankings.

Next Page: Sam Burns on Scottie Scheffler: "He wanted to beat me more than anyone else"