Sam Burns on Scheffler: "He wanted to beat me more than anybody else" 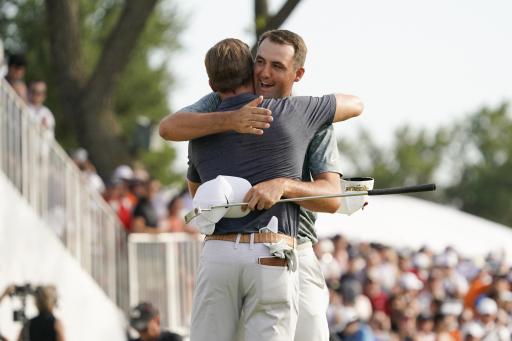 Sam Burns joked he and Scottie Scheffler wanted to beat each other more than anyone else in a playoff at the Charles Schwab Challenge.

Both Burns and Scheffler go back a long way and have come up the junior ranks together to the very top of the PGA Tour. They are best friends.

Now Burns, 25, is a four-time winner on the circuit thanks to a one-hole playoff victory over the World No.1 and Masters champion.

Burns had to wait more than two hours to play that playoff as windy conditions and slow play made for an agonizing wait.

He told the media during that downtime he went to grab a bite to eat then when Scheffler was on No. 16 at Colonial he went to the gym to loosen up.

Burns managed to hole a 38-foot putt for the win when it looked as though Scheffler had the advantage on the first playoff hole.

On the day, he was a more than deserving winner after coming from as many as seven strokes behind at the start of the day to catch his buddy.

Scheffler was described as not having his "best stuff" over the first three days but he managed to play 52 holes without a bogey and shot 66-65-68.

But on Sunday Scheffler couldn't muster a single birdie and dropped two shots to find himself in a playoff with Burns, who has won three times this season.

He added: "Yeah, it's going to be a fun story that we'll get to have for the rest of our careers, and fortunately I got the better end of it this time, but hopefully we're at the beginning of these situations in the future."

How exactly did he feel having to wait so long for the playoff?

He said: "Yeah, I don't know. I didn't know how much I had to protect to be honest, after last week and the past three days here, just how difficult it was. I'm pretty exhausted. But yeah, I guess the fans probably would have enjoyed a little more fun there in the playoff. But yeah, I don't know what to say."

Perhaps before he left his press conference Burns revealed something that says a lot about him and his game.

It was a gritty performance on Sunday and it was expected that both players would have more than likely had to grind it out over at least a few holes in a playoff. For Burns and Scheffler, there is just no give.

"I don't know if I could have done it physically," Burns said.

"But mentally I was ready. Just one of those things where you don't know if you're going to get the opportunity, but when Coach calls your name, you've got to be ready to play, and I think we did a really good job of being ready."