Scottie Scheffler on Burns' playoff-winning putt: "He ruined all the fun"

Scottie Scheffler paid tribute to best friend Sam Burns after he got the better of him in a playoff at the Charles Schwab Challenge. 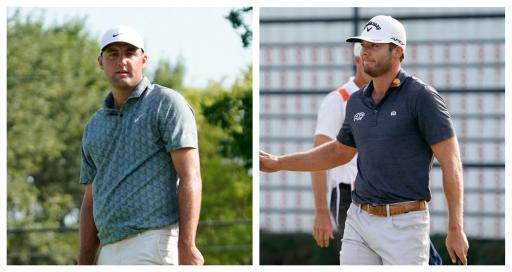 Scottie Scheffler did not have too many words to say after he lost out to Sam Burns in a playoff at the Charles Schwab Challenge.

World No.1 Scheffler, 25, had to hot foot it to his sister-in-law's wedding and therefore made a quick getaway from Colonial Country Club.

He did, however, pay tribute to his good pal Burns after he watched his former junior nemesis drain a 38-foot putt for birdie to claim the win.

"I just didn't have it today. Props to Sam; he played great," Scheffler said after failing in his bid to win five times on the PGA Tour this season.

Had he shot a level par round or better he would have made history and joined esteemed company.

Thats ifs and buts, for sure, but still it's difficult to comprehend just how good Scheffler has been this season.

What was at stake was Scheffler vying to become the fourth golfer since 1960 to post five wins in the year's first five months.

Those players being Johhny Miller, Tom Watson and Arnold Palmer who achieved the feat twice.

Had he won, it would have been the first five-win season on the PGA Tour since Justin Thomas in 2016-2017.

He was trying to become only the third player to capture his first five titles in the same season.

Just bonkers stuff, really. We're not too sure how much Scheffler was aware of. Things just never really got going for him on Sunday.

It was frustrating for him having played his three previous rounds in the 60s and going bogey-free for 52 holes.

Still, this didn't appear to be readily apparent to Scheffler in his disappointment. He just gave props to Burns.

"Yeah, it was a lot of fun. It didn't really feel like it, because he posted a score earlier in the day and we were fighting against it," he said.

"It would have been more fun if we had to do it for 18 holes.

"I kind of joked with him at the end, he ruined all the fun making a 40-footer.

"It was definitely good to see him win. He's obviously a great player and got a bright future ahead."